She Nearly Gave Up, But One Last Hunt For Love Took Her To Church 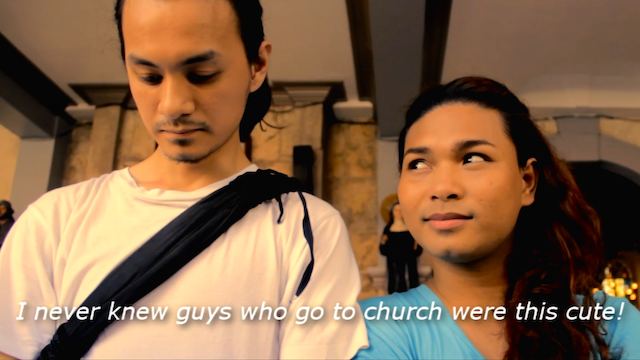 Daniella is gay, single, and desperate.

She inexplicably turns her focus on men. She and her girlfriends brainstorm for strategies and prowl for suitable candidates. What makes a good boyfriend material? Are blind dates still a thing? Is the church off-limits?

Is God sympathetic? Does prayer work? Unfortunately, she is taken for a ride and has a whole lot of misadventure.

Four men later, she finds herself back in church, praying for the same thing – true love.

Some scenes in this film was shot at the Santo Niño de Cebú Basilica, a sanctuary for the oldest religious image of the Holy Child of Cebu.

Chloe’s film has screened at six festivals in the Philippines, including at Cinemalaya.

Watch this comedy drama,’Sisters’ by Lincoln Chia, about two brother in laws who have to confront their awkward relationship at the wedding ceremony!

Article by Grace Chin in Lite on September 8, 2020

Heist At Church Takes a Turn For The Miraculous He Gave Her Love, Gave Him Friendship. Now He’ll Give Them What They Deserve.
She’s Addicted To A Love Potion That Gave Her A New Man Everyday