Don Aravind has been a busy man lately. A winner of both local and international film awards, his latest achievement sees his short film ‘Drive’ nominated alongside Nick Hornby’s ‘State of the Union’ in the Series Mania Festival in France. Here, he gives us the inside scoop on one of his most recent short films, ‘A Merdeka Story: The Kampong’, which features a young man trying to win over his girlfriend’s father. 1. The Kampong focuses on ‘community’ and the ‘kampong spirit’ – what does that topic mean to you?
I think the Kampong Spirit has lost some of its meaning in today’s digital world. People can be more devoted to their electronic devices than their inter-personal relationships. Working on this served as a reminder to me of how important it is to look after the people and relationships around me, and to preserve this kampong spirit. It’s something that, if we aren’t careful about, we can easily lose in no time. 2. What kind of research was needed for the preparation of the shoot? Did you draw any inspiration from your parents – the Merdeka Generation?
I had to talk to my parents, both of whom belong to the Merdeka generation, to gather lots of references. I also looked up past photographs of them during that period. The main character of my film was a direct reference to my father during his courting days.

I chose to feature the Volkswagen Beetle in the film, as he has always told me it was his dream car that made its way to Singapore during his university days. It’s these little elements that I fused together to create the character arc for Krish, the protagonist in the film. 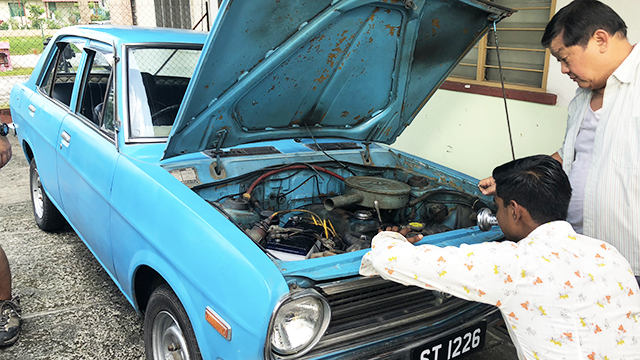 3. What were your biggest challenges while shooting and how were they overcome?
Being part of the Merdeka film project has been rather challenging, yet fulfilling. The first challenge is that I was not from that era, and the second was to re-create something that would be relatable to all generations. The trick was not to fall into the trap of cliches or presumptions of what that era was like. Creating a story with a simple set-up and a realistic pay-off was my main focus.

Building the environment and space which resembled the late 70s was another challenge in itself. However, that was achievable with the strong support of the production team. 4. Words of advice for budding storytellers?
Remember that anything is possible to create. More than passion, you have to have belief. It can be a real tough journey, but faith in your own craft should help you sail across stormy seas.

5. Tell us more about your upcoming projects!
I intend to spend some time writing this year.