Filmmaker Ervin Han On Touching Hearts With His #SG50 Short, The Violin

Often, music tells a story better than words can, stirring emotions on a more intrinsic level.

In recounting the Singapore story, The Violin goes back to basics, relying on a rich film score and hand-drawn 2D animation to recreate the emotional highs and lows of the nation’s history.

This animated short film depicts the journey of a violin in tandem with the progress of the nation. Initially presented as a gift to a young Singaporean boy by a foreign trader, the violin weathers war and crisis, lies forgotten for some time, and eventually enters another home, where it inspires two generations of passionate musicians.

Watch ‘The Violin’ by Ervin Han (Singapore) on Viddsee:

The Violin was featured at the Rewind/Remind Film Festival, organised by the Singapore Memory Project as part of the country’s 50th year of independence celebrations.

Viddsee BUZZ spoke to filmmaker Ervin Han about the thought process and techniques behind the animated short.

We’re curious about how you arrived at weaving the story around a violin. What message were you hoping to convey?

Ervin: I was keen to reimagine some of Singapore’s iconic landmarks – many of which are gone – using animation. I also wanted to make an animated film that different generations can enjoy, and evoke their own meanings and memories from, based on their life experiences.

I decided very early on that this was going to be a silent film, and that the music ‘narrates’ the story. In my head, the only score I could hear was one played by a violin. I think it has that evocative quality that suits the emotional texture of the story.

It’s interesting to think of the film score as a narrator in itself. In working with your composer August Lum, what considerations did you make in how the score should be? As the director, how much control did you have over the music?

Ervin: The score is central to the story experience because it speaks the emotional language throughout the film – be it a sense of wonder, yearning, excitement, loss, devastation or hope.

The emotional core of each sequence and scene had to be clear and conveyed to the composer, who would often discuss with me his approach for specific segments. After that, I left it in his good hands to work out a draft, which we fine-tuned. The composer was very much a storyteller as well. We used two violinists to perform the boy and girl’s parts respectively, to have a different tonal quality for each of the two main themes.

While The Violin does have some 3D, most of it seems to be hand-drawn in 2D. Is there a reason you prefer to use 2D animation?

Ervin: Yes the animation is almost all 2D. Some shots were actually hand-drawn and animated on paper, then digitally scanned into a computer for clean-up and colour. Not many local productions still do this, but the idea was always to adopt a more classic look. It suits the story we’re telling, and a lot of focus was on the detailed, 2D painted backgrounds that set the tone for the film. I also feel that 2D animation often ages better than 3D, and we’re hoping that this film will last a long time.

There is a lot of historical research evident in the film, considering that many of the backgrounds were based on actual photographs. What was the research process like?

Ervin: For this film, we made very few original designs, other than the characters, because most of it was referenced from historical material that we had to be reasonably faithful to. We used published resources like pictorials, and also scoured the National Archives and several museums.

We also researched the times periods and environments, even when it had nothing specific to do with a shot or scene. That came in useful in adding a layer of authenticity. Part of what’s been great about the experience was the chance to re-educate ourselves on Singapore’s history. The team did their fair share of reading and understanding of the affairs and circumstances that led to events in the film. What was the most challenging aspect of making The Violin? How did you and your team overcome the challenge?

Ervin: Condensing 80 years into 15 minutes while weaving a personal narrative was quite a challenge. We didn’t have a script, only a detailed story treatment. I had to work very closely with the storyboard artist while giving him some room to explore and visualise. The storyboards changed many times and we had to start delivering production backgrounds before the story was locked, which wasn’t ideal. Luckily, there was only one background was left unused.

Making a silent film was both liberating and restricting. On the one hand, time was saved on crafting dialogue and exposition, but on the other hand, it had to be pure visual storytelling – using action, performance, staging and cinematography to convey story. Thankfully we had a wonderful score that also lifted the visuals perfectly. 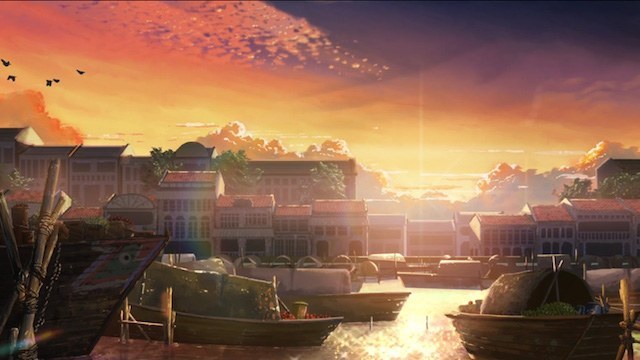 What can we expect in your upcoming projects?

Ervin: We’re working on a pre-school storybook app that we’re aiming to launch end of the year. It’s very much an original animated property and hopefully something unique for local kids and parents to enjoy.

And I’m planning to produce another animated short film for next year, and starting to sound out potential partners and sponsors. My aim is to produce one a year to release around National Day and over time, perhaps we could have an anthology of high quality, animated shorts about Singapore.

Find out more about The Violin on their official Facebook page here.

Here’s another short film by Ervin Han about life in Singapore. Watch ‘Flats’, an animated short film celebrating the void deck as a shared space for people from all walks of life.

Article by Sharanya Pillai in News on October 4, 2015 How Do Complete Strangers Become Best Friends?
A Lost Little Girl Goes Down A Wild Rabbit-Hole At The Night Market!