In A Future Where Humanity Is Muddled By Technology We speak to director Jerrold Chong who made ‘Automatonomy’ in line with the theme Beyond 2020 for the second season of 2020: The Temasek Short Film Project.

Set in a dystopian science fiction universe that reflects the locale of Singapore, ‘Automatonomy’ is a stop-motion animation about biases, xenophobia and friendship through the eyes of a young boy.

Jerold’s mentor, Ervin Han, shares his thoughts on working with Jerrold and his team: “I think that they represent the future of local animated storytelling. They’re hungry, humble, and they’re perfectionists. I hope they continue to get opportunities to shine.”

As this season’s theme of Beyond 2020 encourages filmmakers to express their views and expectations about the future, Ervin found that the teams he mentored had the same concerns about the influence of technology in our lives.

Ervin explains: “In my view, they are cautionary tales. Their depictions of the future are very different but laced with the same concerns about the influence of technology on the human condition and society, about how we yearn for human connection, but the very definition of humanity has been muddled by technology.”

Read our interview with Jerrold:

1 – Hello Jerrold, tell us a bit about yourself!
Hi, I’m Jerrold Chong, a filmmaker and animator who recently graduated from California Institute of the Arts. Even though I love animation as an art form, many of my favourite films are from live-action cinema.

Some of the filmmakers that have inspired my work are Ingmar Bergman, Stanley Kubrick, and Alan Resnais, to name a few. In fact, my love for cinema started after watching ‘Eternal Sunshine of the Spotless Mind’ directed by Michel Gondry. I then started looking more into Michel Gondry’s works, his short films and music videos. My love for films continued and expanded from there on to tell quirky, unique stories with a curious blend of animated and live-action sensibilities. 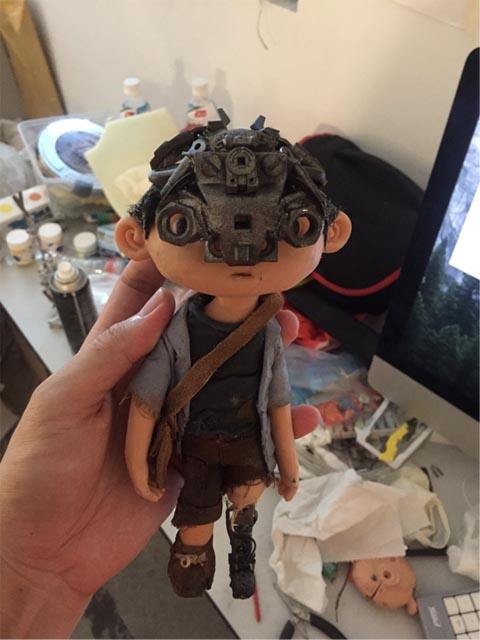 A puppet of Xin, the protagonist in ‘Automatonomy’

2 – How did the storytelling bug start?
I feel that storytelling is a way to make an emotional connection with another person. That’s what makes storytelling beautiful and magical. That a total stranger can relate to the characters in your story and share similar emotions, and that the connection they make — even if brief and ephemeral — that is important to me as a filmmaker.

And with animation, storytelling can be out-of-the-ordinary, weird and surreal, yet convey the same human truths and emotions that are grounded in reality.

The films of Jan Švankmajer, Jiří Trnka, demonstrated to me that animation can, and should go beyond entertainment for children. It can convey strong political messages and social commentary about important issues. And as a filmmaker, I see it as a challenge to break away and subvert the stereotype of animation as just family-friendly entertainment. I want to tell stories that reflect the truths of real life, socially, politically, and I want to do that through visuals that are fantastical and surreal. 3 – What was it like to imagine a future in the theme of Beyond 2020 and how did you arrive at the depiction of this future in ‘Automatonomy’?

As we contemplated the theme Beyond 2020, the idea of robots or AI in a futuristic universe wasn’t far from our imagination. It was an interesting challenge to imagine a dystopian science fiction universe that reflects the locale of Singapore. It was a science fiction space that felt familiar, in contrast to what a Hollywood science fiction treatment would be.

Also, we very quickly looked at xenophobia as one of the pressing issues of our time, especially in today’s context of politics around the world.

Members of our team had the chance to travel and live in foreign countries for extended periods, and we shared with one another experiences of what it felt like to live as an “Other” in an environment where we were the minority. Those experiences left strong impressions on us. Now back in Singapore, we became more aware of the tensions around us that might grow.

It is a tough issue to write a story about. Many times when writing the script, we had to reflect philosophically on the right way to portray a scene or represent a character. Our film’s main characters are two children fending for themselves within a post-civil war, dystopian society. We see that our actions and assumptions reflect on us, through their eyes. The tone of the film slowly shifts to one that is dark and violent. We believe that reflects the reality and potential consequences of xenophobia if left unchecked. 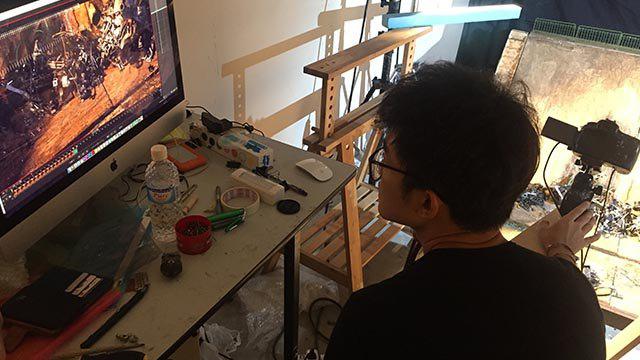 On the set of ‘Automatonomy’

One of the most significant elements is the appropriation of electronic waste and devices to construct our universe. We found old motherboards, CCTV cameras, and pulled apart other old devices to reveal the strange, very intricate and beautiful interior workings of everyday devices. It also adds a meta layer to the material of the world, as I feel that the materiality is a very important part of stop-motion animation. 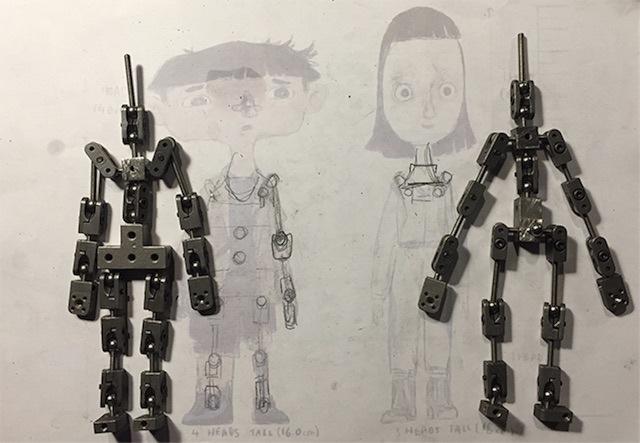 4 – What were your biggest challenges working on ‘Automatonomy’?
It was balancing the ambitious vision with time and physical constraints. I have made stop-motion films before but not at this scale and complexity. We tried several new and more advanced techniques, such as silicon-casting for the heads to obtain more realistic and subtle facial expressions, ball and socket armatures for finer animation, larger-sized and scope of the environment and sets.

Furthermore, my previous films were done in school where the infrastructure for stop-motion and the support exists and we did not have to worry about money. So one big challenge was solving practical things like where to get these stop-motion specific materials in Singapore, how to find a shooting space that is big enough and affordable for a production of this length, etc.

I think that we grew from this experience. We also became more confident that stop-motion in Singapore, at a professional, high production value level, can be a reality. 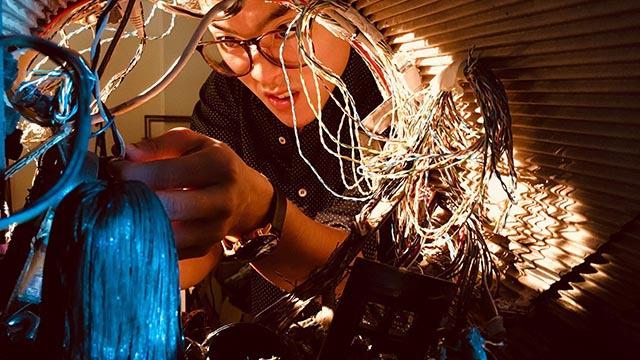 Co-director Mark Wee on the set of ‘Automatonomy’

5 – Could you tell us more about how you developed the protagonist’s character, Xin? And as a young boy, his awareness and his relationship with the Other(s)?
Xin’s character reflects the innocence and naivety of youth, but at the same time, he possesses the same assumptions as us, the viewers. He is a child who had to go through the violence and destruction of a civil war. He lived through it, fended for himself, and has a backstory of all the propaganda and assumption fed to him by his environment and his experience.

One of my favourite moments in the film is his deadpan stare in a scene where he encounters an adult human vigilante destroying and lynching the head of an automaton. It has no impact on him; such is the world and reality. I think that moment speaks profoundly to the dangers of xenophobia, and that it can become a new normal for society without us even realising.

But as a child, he retains that childlike innocence, which we feel is very important. When encounters and becomes friends with a girl similar to his age, we see that there’s a conflict between his desire for friendship, and his inner biases and prejudice. And we see that conflict through his actions and reactions, and that is reflected back to us as viewers. 8 – Why did you decide to participate in Temasek 20/20?
I felt that the themes gave us a lot of freedom to tell stories that are personal to us, yet tackle important issues that we felt were important. The funds provided also allowed us to pursue this project in the stop-motion medium as stop-motion is an expensive medium. And to be able to be part of 19 other films that share stories about our outlook into Singapore’s future is very exciting.

7 – You were mentored by Ervin while making this film. What’s your biggest takeaway from that process?
Ervin was a great mentor, in that he was always challenging us to simplify and to make our story clearer. More often than not, we would get caught up in our vision and ideas that we lose sight of the bigger picture, and Ervin was always there to give us a fresh perspective. That was crucial. He played a huge role in helping us cut out unnecessary “fat” and bring the core themes into greater clarity. 8 – Creatively, and personally, what was your biggest takeaway from the Temasek 20/20 experience?
The biggest takeaway is making this stop-motion film from start to finish, and the pleasure of working with talented and dedicated animators, artists, set designers and costume designers who contributed to this creative vision. A lot of the filmmaking process was problem-solving. Each time we hit an obstacle, it would seem insurmountable or impossible to continue. But someone or other would find a creative solution, and that process made the production feel alive.

Catch Jerrold’s’s short film at https://twenty20.temasek/ when Season 2 launches on 29 May!

Share Your Vision Of Singapore’s Future In This Competition!
He Found A Friend In A Hostile Land And Realised What It Meant To Be Human
Cashier Aunties Vs Robots – Who Wins?
In Memory Of Her Late-Grandmother Who Suffered From Dementia
Turning Fear Into Inspiration