How Did This Get Made: Areola Borealis 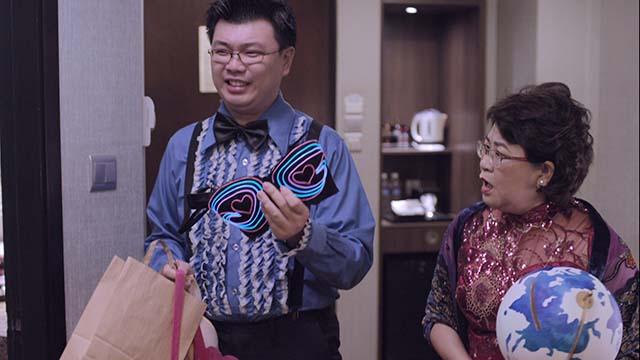 Filmmaker Li Lin Wee wanted to tell this multi-generational story weaving in the nuances of racial bias and the modern choices of brides bucking against customs and tradition. In ‘Areola Borealis’, Jasmine and her new husband Krish have opted for a more unconventional wedding celebration, doing away with the usual traditional customs. Jasmine’s mother is not happy with how it reflects on her and the rest of their family so she tries to salvage it in her own way. When Jasmine’s bra breaks and no one steps up to find a solution except for her friend Deborah, tempers flare and tender emotions are uncovered. 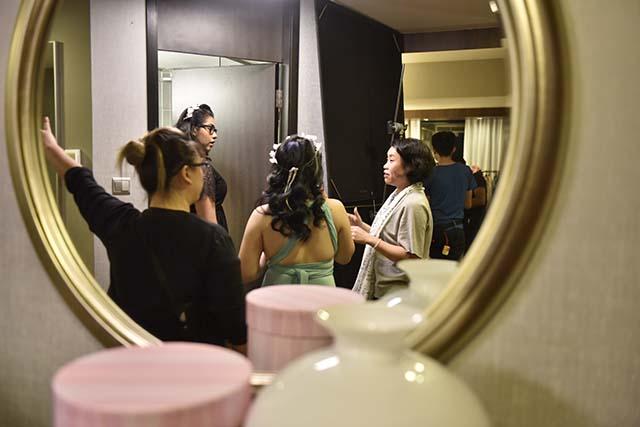 In our inaugural ‘How Did This Get Made’ (International Women’s Day 2020 edition!) feature, we will not only hear from the woman behind the camera (director Li Lin Wee), but also from the women in front of the lens (actresses Sajini and Shi Xuan who play Deborah and the mother of the bride respectively) and the man who delivered the comedic punchline with the right soundscape (sound designer Ross Adrian Williams)! 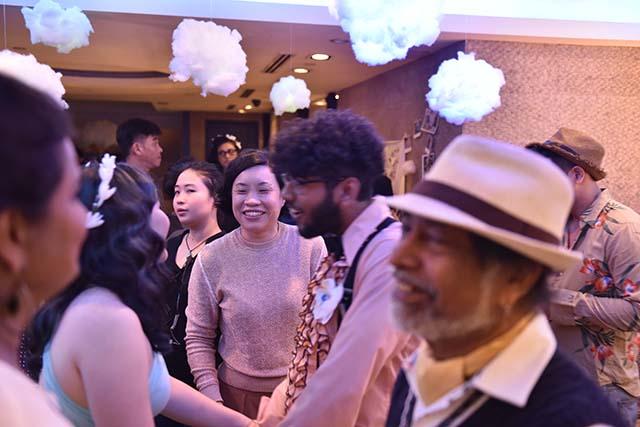 “I was very keen to explore a story about female bonding that was cross generational and cross cultural. I wanted to show this in a lighter, situational way and through an ensemble. The story of a bra being shared is based on something that really happened to me 15 years ago. It was an experience that never left me and it was such a sisterly thing to be able to offer my bra to another woman.”

“I was also keen to explore the fear of ‘the other’, in this case, the protagonist – the mother, sees her daughter marrying a person of another race and also having a non-traditional wedding. I wanted to see this older, uptight woman be put to the test of her patience but at the end, embrace change and to her surprise, her own sensuality. I also wanted to capture the pressure to uphold the nicety of a wedding and the nastiness that can take place behind the scenes to protect that.”

“I also wanted to make it about them confronting their own views about love and body image. As women, we know the pressures we go through facing our bodies. I wanted to show beautiful women of all ages and sizes and could do that in an independent film. We don’t see enough representation of women of different sizes, especially so in Asia where we are bound by standards of beauty for women that are often inaccessible and unreal.”

Shi Xuan, the actress playing the mother of the bride

Shi Xuan is a veteran actress in various roles on screen. Do check her out in ‘The Perm‘– another short film on Viddsee!

“I myself am quite traditional, so this was not a difficult role. But the challenge was to hug a lady so much taller than me! In fact, when we were shooting, I really didn’t know how to. It was [Sajini] who had to lead me. Just like in the storyline: if you step forward a little bit (with what you don’t know), you will find a helping hand. Don’t be scared of being rejected! It ended with my head leaning on her chest. It was very cute, I didn’t know if she was offended or not – my face was right on her boob!”

“The scene at the wedding party was decorated with clouds, like a dream. For me, a cloud is something hanging in the air and is changing. I used that to bring out more uncertainty that would also make me feel uncomfortable. Clouds are not down to earth and although it looks very soft and calm, it can also bring thunder! In my role, it was these little things that helped me with my scenes to capture the emotion.” 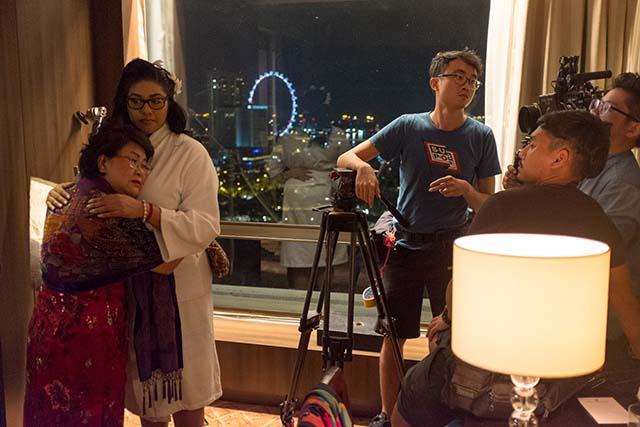 Sajini is one half of the popular Saj & Kumar show on Vasantham. With her larger than life personality combined with her quick wit – she has captivated audiences. Although she has had acting roles before, this is her first role in a short film.

“I immediately accepted the role because it was something out of the norm. I’m usually considered for comedic roles because people think big means funny. But for Deborah, she’s this tree; her presence is big but rooted and very grounded. She cares a lot for her friends but is not a loud, boisterous person. I love that, because I’m a social extrovert. If I could, I’d like to be in an inconspicuous corner and people watch. But that also comes from the fact that I’m always ‘seen’. Because I’m very tall, people can usually spot me. Deborah is the introverted me and is so special to me. I really loved playing her and getting to bring out my secret persona. It’s the part of me that cannot hide because people can’t imagine how I could be (quiet). When they see me quiet, they can’t accept that there are two sides to me.”

“So when it came to camera time and action, my actions or dialogue was very loud and had to be told to bring it down. During filming, it was really late and I was really tired and was no longer showing any expressions on my face. I felt terrible wasting everyone’s time but I got a pep talk so I gathered myself together. It had to speak from my emotions because it was the scene where I hugged the mother.”

“I’ve been both Jasmine and Deborah – where I had to lend my saree blouse (essentially a bra in a saree) to another person because her saree blouse tore from it being too tight. But when my own saree blouse broke, it only had one tiny hook to hold my well-endowed assets together. I got too excited to carry something, bent forward and hook just gave way. I had to wear a very big loose top and I was bra less inside. I went on camera like that! I had to somehow cover it with my hands and not move too much. It was an experience, every time I see it on TV, I’m like, “Guys, I’m not wearing a bra in this clip!” [laughs] 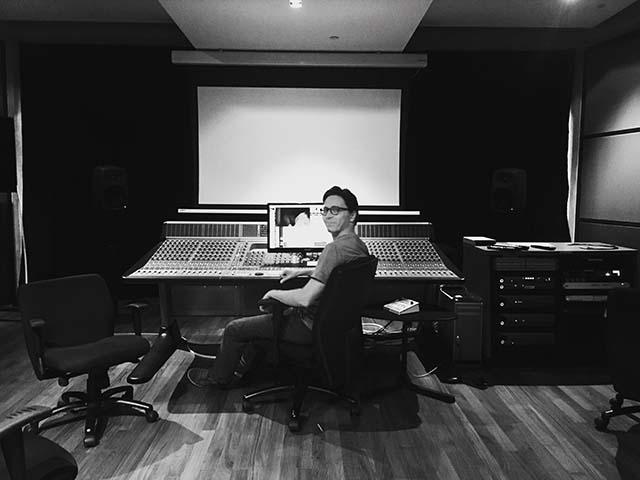 Fun fact: Sound designer Ross Adrian Williams designed the sound of the bra! (“I almost fell off laughing when I first heard it,” shared Li Lin.)

“I read the script and met with Li Lin and we discussed sound design in broad terms. Since this is a dialog-driven short that takes place in essentially one location (a wedding), the sound design was pretty straight forward. I created a sound world that was shown or suggested by the image. So plenty of crowds and we had a diegetic music track in a few scenes as well. I looked to exaggerate certain sounds to bring out character traits, like the swishing of the mother’s dress to enhance her anger. This film was about subtle sounds for the most part except for the bra!”

“So, Li Lin and I hadn’t talked about it (the sound of the bra) and it wasn’t in the script that the bra made a sound. I was working on that particular scene (in the brides’ hotel room) and just thought it would be funny and absurd if the bra made a sound when the lights flashed. In my mind, the absurdity of the bra is a metaphor of sorts for the absurdity of the mother’s attitudes on race and the absurdity of the situation the bride is in. I wrote 4 or 5 very short bra tunes using an 8-bit instrument I have. I played my favorite one to Li Lin and she laughed so I knew that she liked it and the approach would work. I used different versions of the bra tune later in the film and it becomes a narrative thread.” 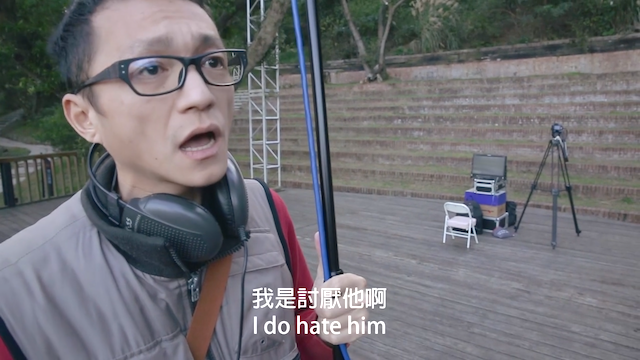 She Battles Villains In A Wedding Dress… With A Shark As An Ally!
An Open Letter To Mothers, Mother Figures And Mothers-To-Be
Mother Only Loved Her When She Was Perfect
“I Robbed Her Of Her Youth” – JD Chua On His Mother