Tang Wan Xin On Obsessive Fandom In ‘Queen Of Hearts’ Tang Wan Xin is the director behind ‘The Outcast’, the second episode of ‘Queen Of Hearts’. The recent graduate of LASALLE College of the Arts is inspired by unconventional characters and found herself drawn to the story of a young girl’s idolisation of a celebrity influencer.

Wan Xin shared how she got into the mindset of the ultimate fangirl and her thoughts on shooting with the iPhone.

Q1. How was the collaborative process of making this film for you?
It was my first time directing a more commercial project so it can be daunting. The team was great – highly communicative and kind. It helped that I had worked with James Hia (cinematographer) before, so we understood each other’s working process.

At the end of the day, it’s simply having to trust your team and have fun! Q2. How did you get into the psyche of Yiting?
By researching and talking to teenagers. When I first read the script, her character intrigued me. I can’t claim to share the same idol obsession since I am horrible with social media, technology and current trends (I know the irony), but I saw her obsession as passion. And that is something familiar to me.

People may find Yiting’s obsession with Tori Leong, or with local celebrities, weird but how different is it to those who are obsessed with K-pop idols or Hollywood stars? The only difference is the level of fame of the idols. The fact is, a fan’s emotions to their idol of choice is similar regardless of where they originate from. 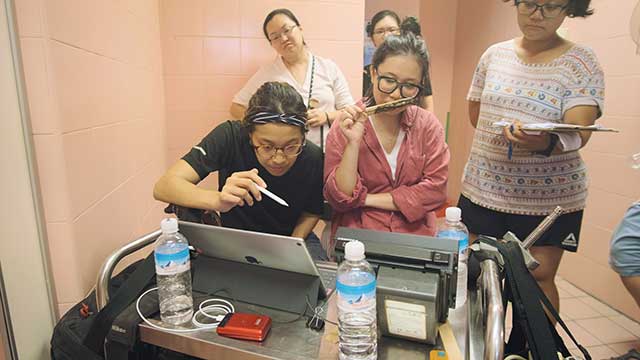 Tang Wan Xin and her team shooting in a female toilet

Q3. What are your thoughts on mobile filmmaking?
I love the small size of the device, and how portable and flexible working with it is, mainly while shooting in big crowds. Since it’s discreet, you don’t have to worry about attracting attention, which could ruin your shot. It’s quite a liberating experience.

Q4. What do you hope for viewers to take away from this series?
Don’t spend too much time on social media. Just kidding! I always believe there are two sides to a story. Put aside your judgment and try to see the other person’s point of view by practising more empathy. Q5. What’s next for you?
I am currently travelling around Indonesia trying to find locations for my next short ‘Happy New Year’ which explores the allegory of barbarism and the state of human nature.

An Obsessive Fan’s Idol Worship Turns Ugly
JD Chua, Creator Of “Queen Of Hearts”, On The Unsacred World We Live In
Rifyal Giffari On The Business Of Social Media in ‘Queen Of Hearts’
What Joann Nicolette Wong Wants You To Know About Social Influencers
The Popular Social Media Influencer He Impersonated Went Missing