In His Own Words: Jacky Lee On Sleeping Beauty and The Man In The Red Suit How did this story and the main characters come about?
I have always been a fan of the coming-of-age genre. I wrote Sleeping Beauty several years back as a short film. When asked to pitch it as a web series, I naturally jumped at the opportunity because it gave me the chance to further develop the characters. My previous film ‘Sunshine’, was also a coming-of-age film, about a geeky guy and a runaway girl.

This time I wanted to focus on the relationship between a group of friends. Having spent 4 years in an all-boys school, a large part of that experience as a teenager was figuring out how to know more girls. The script went through multiple drafts but the core of it was really that.

I am a huge fan of Wong Kar Wai and his collaborators, Christopher Doyle, and Tony Leung but I am unsure if they will ever work together again. That is why I named the three main characters after them.

Friendship is a strange thing. You may be very close to a certain group of friends during a certain phase of your life but that can change very quickly. I guess naming the characters after them is my way of metaphorically representing that.

Sleeping Beauty has quite a quirky narrative approach. Could you tell us more about The Narrator?

One thing I am sure of is that The Narrator is definitely Kar Wai’s future self. Maybe he really has the ability to time travel? Maybe this entire series happens in his memories and he is just reminiscing about his past? Maybe he is really a director directing a series about the story of his life, like a film within a film? Who knows? Tree dislikes the boys using women’s suffering to prove they are badasses. What are Tree’s ideas of a ‘real gentleman’ and a ‘badass’?
Tree is your typical fierce-on-the-outside, but nice-on-the-inside kind of guy. He has his own set of morals and values despite the fact that he is seen as the school bully. He believes that you should always be a ‘real gentleman’ and that in itself is pretty ‘badass’. I would say he is like a father figure, or even a discipline master in school.

Where is the boys’ ‘hideout’?
Geographically, no one really knows, including me. I am not too concerned about where the ‘hideout’ is exactly. I wanted it to be a place where the boys can truly be themselves. You can say that the ‘hideout’ exist somewhere in the boys’ hearts and memories, and only the ones closest to them will have access to it. There are hints that the boys are all film nerds. Any comment on that?
They are, but they are fragments of my imagination, so maybe I am the film nerd? They are big fans of Gus Van Sant, Baz Luhrmann, Nicholas Winding Refn, Quentin Tarantino, and of course, Wong Kar Wai. Basically auteurs who have influenced me as a filmmaker.

What’s up with the missing pizza slice?
My favourite cartoon as a child was Teenage Mutant Ninja Turtles and they are always eating pizza. Fast food is such a big part of pop culture. Pizza especially is something that you share with friends. That is why I wrote it in as the one thing the boys can agree on.

As for the missing slice of pizza, who knows what would have happened if Christopher had gone after the delivery girl to demand an answer about why a slice is always missing? A pizza with a missing slice also looks like Pac-Man by the way.

As a filmmaker, what do you prioritise in your short films?
Fun. Fun when I am writing them, fun when I am making them, and fun when the audience is watching them. I feel that we live in a highly stressful society and I hope my films can entertain and let the audience forget about the stress for a little while, hopefully putting a smile on their faces in the process. What was it like working with Tina Fung?
I met Tina at an event a couple of years ago and got in touch with her when I needed an art director for this series. She is super talented and great to work with — although art direction for film is a new format for her, I knew I was in safe hands from day one. She and her assistant, Cedric Ching, is the most amazing duo I have worked with. Her background in Interior Design and her experience with set building for big events gave this project a fresh perspective. I thought I would be the one with crazy ideas, but Tina and Cedric outdid me.

Tell us more about the decision to use music by local musicians for the soundtrack?
I am so happy that local music is starting to get the recognition it deserves. We have really good musicians across different genres and my aim was to feature as many as possible. To me, film is 50% visuals and 50% audio, so having a good soundtrack is equally important to me. All my favourite films boast a good soundtrack and I hope the same for my own films as well.

All the musicians we reached out to were more than happy to be part of the project and I cannot thank them enough. Here’s a link to the soundtrack. 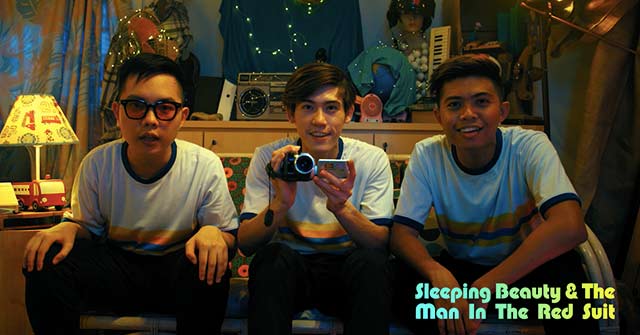 What happens to the boys next? Watch the second episode of ‘Sleeping Beauty & The Man In The Red Suit’ to find out!

These Boys Need A ‘Badass’ Plan To Get Into A Party
These Nerds Are Plotting A ‘Robin Hood’ Heist
They’re Stealing The Teacher’s Car!
These Nerds Want To Bully The School Teacher
Nerds, Bullies, Car Robbery, And Party!