‘Cash Only’ is about Jiamin, a young and unemployed graduate who finds herself in charge of her Ah Gong’s cash-only provision shop during Labour Day. When a strange customer shows up for a simple purchase, things quickly escalate into a confrontation.‘Cash Only’ is a Viddsee Originals production, and part of the Scene City anthology of short films from Singapore.

We speak with the director of ‘Cash Only’, Michael Tay, on storytelling and some ideas behind the film. Tell us a bit about yourself — your interests, and what you do.
Hi I’m Michael Tay. I teach and write mostly for television to earn my bread. I have all the typical hobbies of an antisocial teenager (e.g. movies, video games, comics, YouTube). And I rant a lot on Facebook.

What got you started on storytelling and film?
My career as a storyteller probably started when I was eight. Our VCR broke and my mum couldn’t record any of her favourite TV shows because she had to work late shifts at a factory. So while she was cooking lunch in the day, my job would be to narrate to her stories of the TV shows she had missed out on during the night before.

Sometimes I told it to her as it is. Sometimes I exaggerated. And other times, I made up something entirely different just based on the ambiguous show title. She probably suspected at some point but never once pointed it out. This fine art of “bullshitting” gradually became my line of work. Michael Tay (centre) working with actors Ahamed Ali Khan and Audrey Luo during the filming of Cash Only. All behind-the-scene photos by Jericho Soh

What was your inspiration for ‘Cash Only’?
‘Cash Only’ was inspired by my sister’s experience working as a part-time cashier in a supermarket. She would return home with lots of stories to share. They range from handling a drunk customer to an auntie shoplifter.

Out of all her encounters, there was one that she labelled “every cashier’s worst nightmare” — she was fortunate enough to have her superior around to help her out. But my questions to her were “What if you had to handle it alone? What would be the outcome?”

That became the story of ‘Cash Only’, about how a simple problem can bring out so much in us.

Could you walk us through some of the ideas behind the social class divide portrayed in ‘Cash Only’?
I notice in other countries when people ask “Where are you from?”, they are probably asking which part of the country you come from. For the same question in Singapore, they are either asking about your school or trying to check if you stay in a HDB flat or landed property (to suss out your social status).

Two years into my career as a TV writer, many assumed I was from a Junior College, but I actually graduated from Ngee Ann Poly. I’ve been working for close to seven years and I still encounter people in the same field who are curious about which secondary school I came from. It’s kind of irritating. They are usually more curious about WHERE I studied filmmaking, than the works I’ve done so far.

It’s very clear to me that people from different social classes in Singapore really do not mix much. The concept of a social class is a constantly evolving one. Having a degree today doesn’t mean you are set for life or that you are now an elite. If your education certificate states you are a business major, it also doesn’t mean you are immediately a banker or a CEO. Many of my friends from school who didn’t end up pursuing media/filmmaking are also flourishing or finding great joy in a totally different field.

Jiamin believes she should be seen doing something different with her university degree. She is unaware that a lot of the migrant workers who make our roads or build our houses probably hold the same qualifications as her. 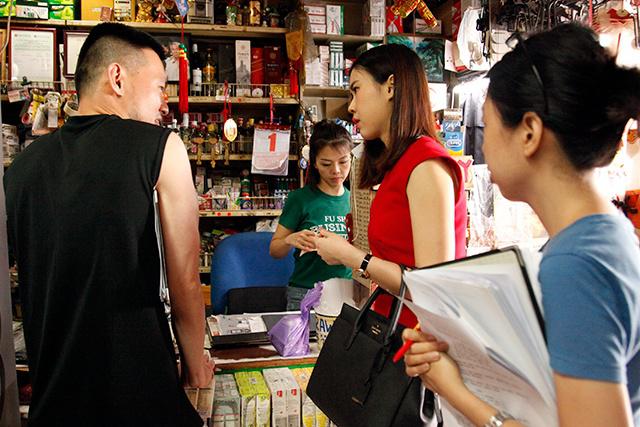 Behind the scenes of Cash Only

We can see from the shop’s calendar that it’s 1 May. Why did you decide to show this story taking place on Labour Day?
It’s the best time to put our character in her place. It is a time when the migrant worker community, her customers, gets to take a break. But she still has to carry on serving them with a smile (or lack of one). The situation is designed to make her totally confront herself and what she is doing with her life.

Visually, the calendar showing the number 1 is also symbolic of how we are constantly striving to be the first in class when in pursuit of the paper. The pictorial reminder is constantly lingering in the background.

How did you develop Jiamin’s character? What are her anxieties and her relationship with the community in the location of her grandfather’s shop?
I totally modelled Jiamin after my sister. She’s a hundred times more academically accomplished than I am and is now a full-time teacher. She wears her paper qualifications like a badge of honour. Nothing bruises her ego more than putting her papers or education background into question. Tell her it’s easy these days to get into a Junior College and she will totally blow her top at you.

Jiamin’s relationship with her Ah Gong (grandfather) is a very intimate and personal one. We design Ah Gong to be a character that totally dotes on the granddaughter. In his eyes, he sees no merit. As long as it is earned by his granddaughter (e.g. PSLE, O-Levels), he will hang it up in his shop to show off to others.

Despite Jiamin’s obvious reluctance to run the shop, she will do it for her Ah Gong when he needs it. Behind the scenes of Cash Only

The frustrations surrounding spoken language can be felt quite keenly in ‘Cash Only’. Why was this included in the story?
Language barrier has to be one of the many essential obstacles we explored in the story of ‘Cash Only’. We even designed the show in such a way that only languages Jiamin understands (Chinese, English) are given subtitles. Other languages (Hindi, Tamil) are totally not given any.

This is to add on to the experience of being in a communication block. For those who understood what the Strange Customer was speaking, it also presents a good opportunity for them to share what they know with their non-Tamil and non-Hindi speaking friends.

Paper is significant in a few ways to ‘Cash Only’ — from how we measure transactions in a sundry shop, to how we measure each other. What are your thoughts on this?
Singaporeans really should stop measuring each other based on their paper qualifications. It’s so boring and dull.

Compare penis sizes, skydiving experiences, photos of the things you put in your mouth, close encounters with death or whatever! I just hope the next person I talk to is interested in what I did last weekend, not my education background.

Watch ‘Cash Only’ by Michael Tay (Singapore) on Viddsee:

Article by Lainie in Voices on September 9, 2020

A Business Graduate Learns The True Value Of A $1000 Bill
Spotlight: Filmmaker Kannan Vijayakumar Is Inspired By Real Life