In His Own Words: Rifyal Giffari on A Spectacular Sight Rifyal Giffari is a writer, director and film critic. His latest short film, A Spectacular Sight, takes a novel approach. It explores the real meaning of Singapore’s National Day to an individual, through her family.

Rifyal is currently an associate editor of SINdie, a Singaporean film magazine.

Tell us about yourself, and how you got into filmmaking!
I studied animation, because I love films. After getting a diploma, my lecturers encouraged me to hone my writing. Unfortunately, few animation degrees focus on screenwriting. But for filmmaking, there were loads of screenwriting classes. I took a BFA in Digital Filmmaking at NTU thinking ‘Oh I know half of this, animation is like film, in principle’. I was wrong, but I also loved it way, way more.

I didn’t want to direct; I was desperate to be a screenwriter. I thought it was like animation: you get to make films, but also stay indoors. None of this standing in sweltering weather nonsense. But we had to direct our own scripts (in NTU), and I took to it instantly. I saw how others hated directing and couldn’t figure it out. I loved it; the mechanics, even the performative aspects of it.

Inducing the best performance and collaboration from people requires different approaches. It’s about managing temperaments and navigating personalities. It is probably the least talked about part of the craft. As students, you often fail at it. 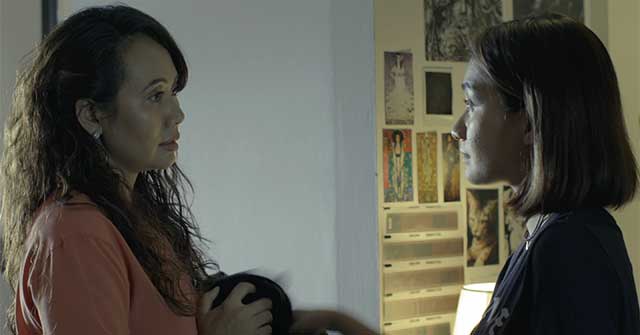 Lynn confronts her stepmother in ‘A Spectacular Sight’

A Spectacular Sight looks at identity and belonging in Singapore from a more personal lens. Why this perspective for a national day film?
Before we started discussing this film, I was speaking with another Singaporean filmmaker. We couldn’t wrap our heads around making a National Day film. The subject is so nationalistic, patriotic and loaded.

Pitching the story almost felt like a joke — a film where we never hear a National Day song, or see the parade, and has as little to do with it as logically possible. But then I got into it.

My family actually likes National Day a lot. Growing up, my family would always go out to watch the fireworks. We were pretty good at finding surprising spots to view the fireworks. It’s corny, on the nose, and strange to me now as an adult.

Fireworks are special. They trigger awe and wonder in my monkey brain. They’re elementally transcendent, going straight to your primal roots. Explosions? In the heavens? Pretty cool when I was a kid, still cool now.

Last year, I found myself by the stadium with my girlfriend, watching the damn fireworks. (It’s not the) marching processions, dance choreographies, sports hero cameos and National Day song reboot. To me, the crux of National Day is gathering and being close with your loved ones.

Both A Spectacular Sight and Sweet Bloom of Night Time Flowers feature young women struggling against their family. Where do you draw your insights when writing these conflicted characters?
Personal experience is an inescapable source. It intrudes on your work, so you had better be aware of it early on. I don’t have it all down, I’m still finding bits of myself as I go along.

I still don’t know how I truly feel about my family in relation to myself. Everything is surface level. I can’t afford a psychiatrist, so my self-awareness almost always comes just a bit too late, and too shallow. I’m trying to dig deeper, but my heart is covered with hard rocks.

As for the characters being women, I know more women than men — and most men I know are super boring. 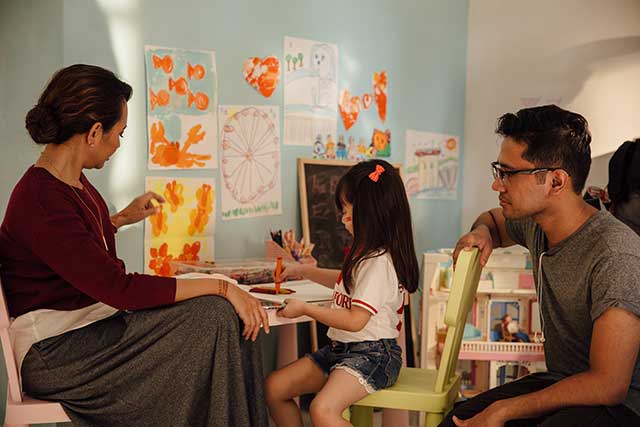 What was your aim as the director of A Spectacular Sight?
This was a great proving ground to test as much as I could; script elements, a new crew, workflow and working processes. Learn by going back to basics, and doing it the way I thought was ‘wrong’ or difficult.

Never done a story in Malay? Now it’s in Malay. Do I usually rely on my shot list and storyboard? I’ll improvise. Never done VFX before? Do it now. I learnt lots of ‘rules’ in film school. I tried to break as many of them as possible, whilst delivering the story. If this weren’t a commissioned film, I would have done a more drastic experiment. I am tired of rules. If it doesn’t make sense, I’ll do it my way.

I also brought people I wanted to work with into the fold. You should build a community of trustworthy, reliable people. There are always people trying to take on a bigger role in production. It’s fun when I get to give them that chance.

Honing the group dynamic on set is important. This project was fun, particularly in production.

There’s a sense of being outside looking in, despite having tickets to the celebrations.
Representation is important. When dealing with national symbols and rituals, you are often forced to sum everything up neatly and easily. It is impossible.

As much as you try to be inclusive, you will end up with a caricature or an ‘ideal model’ situation that excludes certain people. I find that troubling, hence why they’re not the picture perfect family, even if they try to be. Behind the scenes of ‘A Spectacular Sight’

What were your greatest challenges in making this film?
Doing post-production remotely was difficult. I was attending the Bucheon International Fantastic Film Festival in South Korea, figuring out how to pitch a feature on my own. Festivals drain you relentlessly, everyday. Piling on vfx, colour and sound is rough. There’s no way around it. You just have to be eternally tired but power through.

The car scene and VFX shots were tricky. What you don’t see in the car scenes is the crew in the edge of frames, trying to make the shot without distracting the actors. It was uncomfortable and difficult doing a page or two worth on a long master. I couldn’t concentrate for long periods. We were shooting during fasting month, with Malay actors and some crew.

The translation was difficult too, with a Chinese script supervisor, editor and sound designer. The editor in particular, since improvised lines don’t show up on the script, but that’s why I’m around.

VFX was new for everyone on this. It was a learning curve that needed managing. The cast and crew of ‘A Spectacular Sight’

Any interesting stories about the shoot with the crew and cast that you’d like to share?
It was great working with new people I liked and had a gut feeling might work out. This includes the cast who didn’t have to audition (except child actor Mishall). It was an experiment and challenge figuring out if my instincts were right. I was surprised it worked out.

I had tremendous fun bringing in friends. You have a better collaboration, since we know each other’s taste and aims. Jolinna, Director of Photography, improvising her camera in the middle of the take. Wanxin, Script Supervisor, suggesting a movement or look. It almost always added value. You never want to hear a suggestion so off the mark, you lose faith in the person’s compatibility with the project.

I’m familiar with Julie, the production designer. I spoke to her very little as I knew what she’d bring in — always 110%. She can do anything, except last minute changes. I try to give as much clarity as possible ahead of time. I showed up on set to see the production design the very first time and it’s pretty much good to go.

I suddenly asked for a mug of coffee to be in a scene. I could see she was annoyed, which was hilarious. It’s just very her. I had missed working with friends and negotiating their little quirks and intricacies. I find it fun.

Watch ‘A Spectacular Sight’ by Rifyal Giffari (Singapore) on Viddsee!

One more! A father and daughter rebuild their relationship in ‘Pa’ by Sabrina Poon (Singapore)!

A Broken Heart Brings This Family Together
In His Own Words: Don Aravind on Drive Is love at first sight realistic?

In His Own Words: Quek Shio Chuan’s Rise From PA to Film Director
In Her Own Words: Sabrina Poon Discusses Family And Film