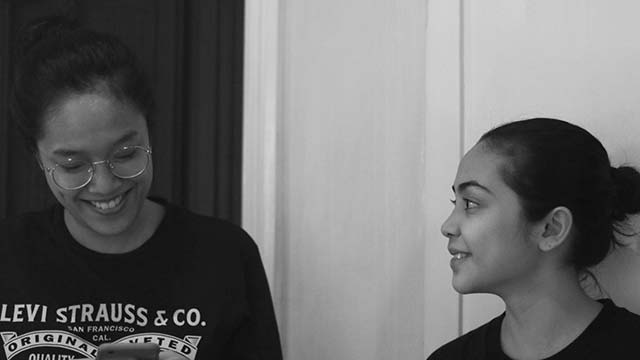 Filmmakers of ‘As Time Flows By’, Janna Lejano (left) and Annika Yañez (right)

Annika Yañez and Janna Lejano met at De La Salle College of Saint Benilde and became fast friends over their mutual understanding and love of film.

When it came to creating a thesis for their Digital Filmmaking course, it was a no-brainer to pair up and thus, ‘As Time Flows By’ came to life.

Annika and Janna shared more about the filmmaking process in our chat below:

Q1. Tell us a bit about yourself and your team!
Janna: Annika was the first friend I made at Benilde. When it came to making the film, we agreed to split the work equally. I would be the Director of Photography and Editor.

Annika would take on the director role. We tried to write something together, but it didn’t work out too well. So she ended up writing a screenplay that was very personal.

Q2. Could you share with us what your main challenges were in putting this together, and how did you overcome them?
Annika: We had a hard time casting our ideal “Woman” (partner of Trish) until we met Carmina “Mina” Cruz.

In the scene where the lovers jump into the ocean together, I initially wanted her and Chase Salazar (the actress who plays Trish) to jump in the water while holding each other’s hand.

A scene from ‘As Time Flows By’

But Mina was concerned about safety and hesitated, which is the take you see in the film. I didn’t ask for another take because I know how traumatised Mina was, and the final scene helped hint in the story that there’s a high chance that the woman would leave Trish eventually.

Another problematic scene was the romantic walk before the Japanese restaurant. It’s my least favourite scene for these reasons:

1. I wanted the camera to be static via the use of a gimbal while they walked but my team forgot to bring it to the shoot.

2. We ran out of batteries for the lapels so we only had one audio source, the shotgun microphone, which wouldn’t be good for post production.

3. We shot it around 11pm and since we had started filming at 8am, my actresses were tired and weren’t hitting the right character notes or emotions.

In the end, we remained positive, fed everybody more than enough food and understood that the mistakes we made are just lessons in filmmaking.

Annika is one of the ten finalists of the Viddsee Juree Awards for the Philippines competition, a filmmaker community initiative to celebrate and support filmmakers and film communities in Asia. Check out the rest here.

Article by Karen Wong in News on September 6, 2018