Martin Hong is a commercial director and filmmaker with clients like DBS, McDonald’s, Scoot, and Laneige under his belt, amongst many others. His short films have been screened and nominated in festivals locally and abroad. We speak to him about his short film ‘A Merdeka Story: The Soldier’, the technicalities and challenges of producing a period film, and what his father (from the Merdeka Generation) thought about his film. 1. How was the creative concept for The Soldier conceived?

The script was written by Jean Tay, who wrote all 4 Merdeka Stories, each focusing on a different aspect of what the Merdeka generation did for our country. Together, we discussed the areas we wanted to focus on. For me, it was the long-lasting friendship between the men, as well as how we wanted to tell the story, in a short span of just 3 minutes.

2. How did you prepare for the shoot? What kind of research was needed?

We scoured tons of articles, photos, historical videos as well as documentaries, to make sure we accurately captured the spirit of that time. I also talked a lot to my dad about it (he is part of the Merdeka generation) and referenced some of his old army photos for authenticity. The picture of Michael and Seng in the film was very closely based off my dad’s real photo. We also collected an entire archive of old army photos to ensure we got the details of their uniforms, guns and even training camps to reflect the period we were depicting. 3. What are things to keep in mind when shooting for a scene that will be treated to black & white?

The important thing is getting used to seeing the world in tonal values and textures. That is what’s crucial in B&W. We made sure all our props and wardrobe had varying textures to them. Even the sweat on the actors’ faces (a mix of glycerin and moisturiser) was explicitly added to bring out the raw texture of their skin. We also had varying materials such as cotton shirts with metallic watches and glossy plastic spectacles; all these helped when we rendered the scenes in B&W. Composition becomes a lot more critical because you no longer have colour cues.

4. The props were extremely realistic. How challenging was production design?

Thank you! Our team worked really hard to get the details right. Period films are always a challenge because everything from wardrobe to props and even hairstyles had to be extensively researched for it to be believable. One slip up wrecks the whole illusion.

We researched the exact model of guns used at that time and the kind of environment that the NS-men used to train in. Sadly, a lot of the original NS campsites have been torn down, but details such as buildings with brick wall exteriors or gridded windows, all help to paint a more convincing period piece. We had to hunt for a field which had no buildings, HDBs or skyscrapers in the distance because they weren’t around in that era. 5. Compared to the real National Service experience, how much has been dramatised for the sake of compelling filmmaking and how much is kept as closely to the original experience? What are the elements you add in to compel the audience – e.g. that cute moment when a young Michael encourages a young Seng with a poster? 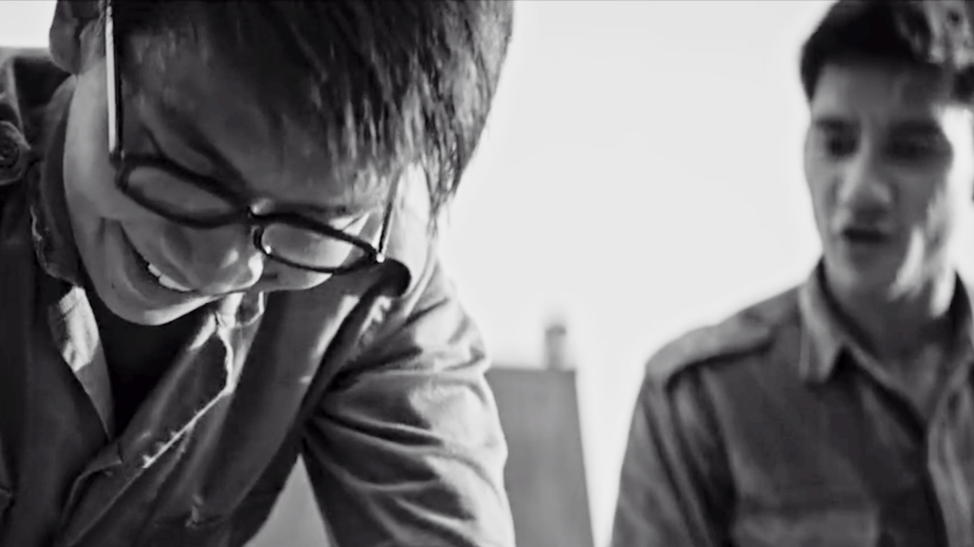 In that sense, the level of friendship onscreen was inspired by real experiences.
But other scenes like the push-up scene were scripted to fuel that friendship in a short amount of time. Also, the flashback scenes didn’t have a word of dialogue (only voiceovers), which meant their friendship had to be summed up in actual gestures.

6. Your father is part of the Merdeka Generation, did you adopt some of his experiences into the film? And what did he think about the film?

He told me a lot about his own NS experiences. I think the part about NS that gives you a chance to interact with people from all walks of life, is still relevant today. And that’s something we tried to keep in the film. My dad loved it! He was so proud that I based it off his NS photo. 7. Majority of your short film is set in the 1970s where a young Michael and Seng were newly-enlisted National Servicemen. How did you make this flashback relatable and endearing to a contemporary audience?

The friendship between Michael and Seng had to be sincere so the audience wouldn’t doubt its authenticity. The actors did an excellent job in portraying this subtly as well. It’s the little gestures that spoke volumes, like the pin-up poster during the push-up scene, or even Michael slowing down to encourage an exhausted Seng, while the rest of the platoon mates took off. These small moments are what we remember in time to come, and I guess that’s what made the flashback more heartwarming even though it was so short.

8. Words of advice for budding storytellers?

Work harder than anyone else you know. Don’t complain so much. Always count your blessings. Constantly expose yourself to other artists, filmmakers, designers and performers. Don’t ever let success get to your head.

9. Tell us more about your upcoming projects!

I’m working on a new music video with a local artist and a dear friend of mine. I also have another potential long-form narrative I might be working on, which is honestly a nice return to the storytelling format. Additionally, I’m working on a photo-series, as well as my very own first personal short film in 4 years!