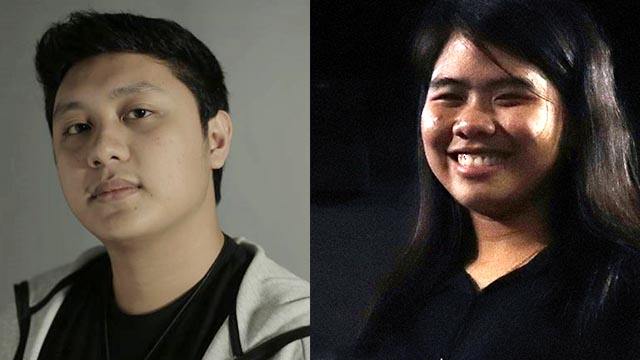 Q1 – Tell us a bit about yourself and your team!
Ralph: I grew up in Muntinlupa City but spent the rest of my life in Olongapo City and Manila for my studies. My love for horror films and my college years as a Communication Student at Far Eastern University shaped my passion for filmmaking.

I aim to contribute in continuing to enrich Horror Cinema here in the Philippines, through incorporating real life horrors with the storylines I make. My crew and I are all communication students of FEU, who came together in making a film for our Film Production class.

A scene from ‘Look Through (Dungaw)’

Zheina: I’m 20, and I’m a graduate of Bachelor of Arts in Communication. I was able to produce numerous short films which were showcased and won in different student film competitions including the multi-awarded films, ‘Ma?’ and ‘Dungaw’.

Beyond logistics, I also venture the field of sound design and bagged Best Sound for the film ‘Ma?’ in UP Cinema Piling Obra Vidyo XIII. I also received the ‘Young Producers’ Award and Best Sound in the 4th Emman Awards for the film ‘Dungaw’.

Through filmmaking, I was able to simultaneously practice my passion in music as well as my abilities in logistics. Alitaptap Pictures is a group of Communication students from Far Eastern University – Manila who came together to make a short film for their Cinema 2 class.

Q2 – What is the inspiration behind this short film?
The film was made to communicate the horrors and pressures of teenage pregnancy through incorporating an inspiration from a popular urban legend at Far Eastern University. This film was also inspired by the directors aunt who had a similar demise as one of the characters.

This film aims to raise awareness to the helplessness women feel when caught up with a situation where there is only one escape.

32. Could you share with us what your main challenges were in putting this together, and how did you overcome them?
The short film was shot for one whole day in Far Eastern University’s Nursing Building. One of the major challenges is the CHED Memorandum wherein all school related activities should be done inside the campus. The said memorandum was made due to an accident that killed students who were destined to have their field trip as a school requirement.

Due to this, we started from scratch; replacing our concept. After finalizing the concept, the next challenge was the location permit. Though the only choice of location that we have is the campus we thought that it would be easier to process permits but little did we know that it would be more difficult.

Production schedules were delayed because of the long processing of permits. Shooting inside an institution meant that papers would be passed on from one department to another.

Producing a film within a limited period of time adding up being restricted within the university was a big challenge to us yet we were able to overcome those through proper coordination and cooperation. Pre- production stages started in February 2017 and post-production ended in April 2017.

Watch ‘Look Through (Dungaw)’ by Ralph Quincena (Philippines) on Viddsee:

Look Through (Dungaw) is one of the ten finalists of the Viddsee Juree Awards for the Philippines competition, a filmmaker community initiative to celebrate and support filmmakers and film communities in Asia. Check out the rest here.