Rogin Losa of ‘Lovely Is Off Air’

Q1. Tell us a bit about yourself and your team!
Hello, I’m Rogin! I write like Vonnegut, watch films like Tarantino, and laughs hysterically at local TV like Aling Nenang down the street.

Making films to me is like making a huge life decision all the time. I feel like a 40 year old in a mid life crisis selling their house for a sports car and I never felt more alive. A scene from ‘Lovely Is Off Air’ by Rogin Losa

The team I had for this short were amazing at their field. I needed a team that was passionate and gave a damn. Of course, they were my friends, I’m broke. But I got my friends that’ll work hard and sing Bohemian Rhapsody in the shoot van harder.

Q2. What is the inspiration behind this short film?
‘Lovely Is Off Air’ was inspired by this fear I had on my last semester of college.

The fear that I may be prone to post-graduation depression. It something that affects almost every graduate, regardless of their drive or their academic position. It’s a side of the graduation photo posts that no one gets to read. In a way, going through it as a bit shameful. It’s a bit of a foreign concept.

But it’s like an open secret as well. A lot of fresh grads go through it. Having a story revolving around a radio station was my first concept. 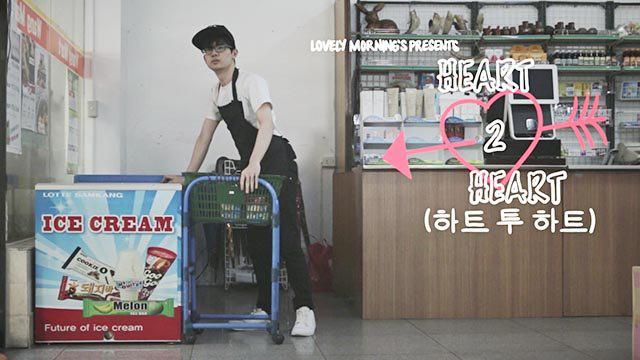 I married the post-grad depression angle and my love for radio together. I wanted to put Filipino radio in the spotlight. I love how it has it’s own identity. It’s so fun and obnoxious. It’s audible slapstick comedy! Also, it added the comedic element I wanted. I didn’t want to approach the film with just the sad bits. I wanted to tell it like how life usually is— the happy and sad parts intertwining.

Q3. Could you share with us what your main challenges were in putting this together, and how did you overcome them?
Being a graduate student at the time, my main concern is getting the money to produce it. But as the director, my main struggle was translating the vision I had for the film to my crew.

The film is surreal, has meta-comedy elements, and is somehow dramatic as well. The film was reliant on visual humour and the sturdiness of the world I was building with my crew. This was also my first narrative and I wanted it to go right. Unlike my documentary, I was a one man filmmaking machine. Having a team involved was a blessing and a challenge. It was my first directorial project. It was also the first film I’m not co-directing with anyone. That being said, the pressure for my team and I to pull the film off was the biggest challenge ever. But that also pushed me to pull it off exactly how the film was visualized.

Watch ‘Lovely Is Off Air’ by Rogin Losa (Philippines) on Viddsee:

Rogin is one of the ten finalists of the Viddsee Juree Awards for the Philippines competition, a filmmaker community initiative to celebrate and support filmmakers and film communities in Asia. Check out the rest here.