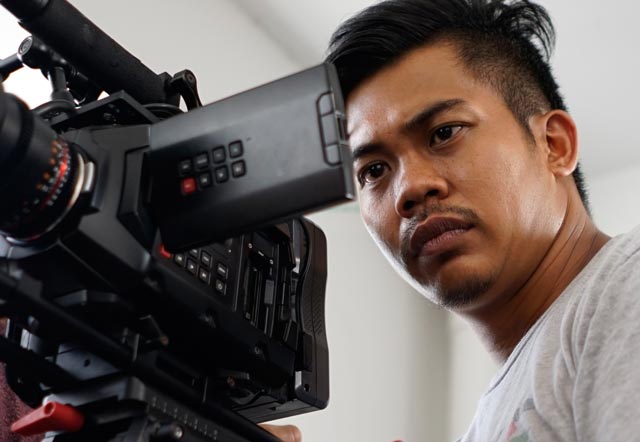 Shaiful Reezal is a Director of Photography for several local TV series. Working with different directors gives him an opportunity to learn from them in storytelling. Together with two other Executive Producers of Echo Entertainments, Siti Mulyati and Shahreen Tajri, they formed a team to execute ‘Kurung’. Shaiful aims to work on films that explore real issues and can create awareness within the community.

A scene from ‘Kurung”

What is the inspiration behind this short film?
The pre-production of ‘Kurung’ began in August 2017 after Shaiful’s debut short film ‘BEBAS’. The three executive producers listened to stories to get inspiration for ‘Kurung’. One important fact that we found out is that about 50% of the drug abusers in Singapore are from the Malay community. Through this film, we feel we can create awareness of true stories out there that might have been overlooked by the community.

Could you share with us what your main challenges were in putting this together, and how did you overcome them?
The main challenge of executing ‘Kurung’ is to make sure everything is close to reality. From the storyboard, to casting, location, props, camera angles and lighting — all are important. We do not want any error to disrupt the viewer’s attention.

The Producer casts the correct actors and gets locations that fit the characters. The Director of Photography ensures his lighting team and shots give the correct mood. The Art Director and her team researched the correct props for drugs and ensured the house has Hari Raya vibes. The Director explains his aim to the cast, helping actors with scenes outside of their comfort zone.

Everybody was on the same page, from the production assistant to the director. Every single detail is in place before calling ACTION!

Kurung is one of the ten finalists of the Viddsee Juree Awards Singapore competition, a filmmaker community initiative to celebrate and support filmmakers and film communities in Asia. Check out the rest here.