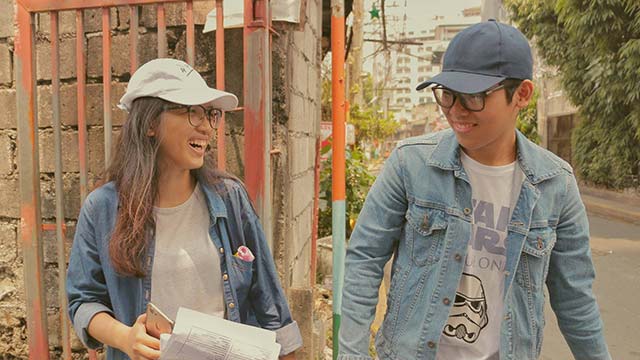 They met in De La Salle College of St Benilde and discovered a kinship in scriptwriting and directing. Of note, Ron’s comedy short film, ‘Family Drama’ (Pamilyang Drama), was a finalist in the 2018 Sinepiyu Film Festival 2018, and Elaiza was a part of ‘Uyayi’, the multi-award winning film at the 2016 Sinenanay Film Festival.

We speak to Ron who shared some insight into the creation of this film.

Q1. Tell us a bit about yourself and your team!
Elaiza and I have been partners for many films. With her expertise in production design and my skills in editing, we decided to combine forces for our thesis film, where I served as a technical director overseeing visuals, lighting and story flow.

Our team comprised of good friends and fellow film students and was an entirely collaborative effort. We encouraged suggestions and advice from anyone in our team on how to improve the film, be it on lighting, camera work, or directing the actors. This is why we always call it OUR film.

A scene from ‘Stand Up’

Q2. What is the inspiration behind this short film?
The inspiration for our film was an old idea of mine about a depressed stand-up comedian, which I made to test the tragicomedy genre. Elaiza had the idea to combine it with another story we were also developing entitled ‘Dream 8’, about a girl who meets her soulmate but only in her dreams.

While developing the story further, I suggested incorporating comedy tropes both old and new, and exercising the art of visual comedy in an intelligent and clever way, while Elaiza helped firm up the story and add depth by understanding the character’s goals.

Q3. Could you share with us what your main challenges were in putting this together, and how did you overcome them?
We’ve encountered so many challenges in making this film! In writing the script we struggled to keep it short but still have depth. It was originally 29 pages long and had 31 sequences.

In casting, we had specific actors in mind and we were lucky enough to get Karl Pineda, our pick for Reg quickly. It was a long search to fill the role of Alyssa. It was sheer luck that we came across the very talented Veronica Reyes.

On the first day of the shoot, there was an incredibly heavy storm. Although we were shooting indoors, it messed with our lighting and sound. What should have taken 1 hour to shoot 5 sequences became 2 hours for 3 sequences.

The last two days of the shoot was when all hell broke loose.

Due to bad weather, the electricity in our second location was cut and we had to reschedule for a third day of shoot. Some of our crew, including me and our lead actor, were sick too.

A scene from ‘Stand Up’

On our final shoot day, we had almost 15 sequences to finish and an entire bar to design in only a day. Even though we suffered with construction noises, failed microphones, low battery cameras and many other obstacles, we prevailed and went home, tired out of our minds but happy.

This film’s production was a huge pain for all of us, but I know in my heart we would do it all over again if we had to.

This film was taken offline at the filmmaker’s request as it continues on the film festival circuit.

Ron is one of the ten finalists of the Viddsee Juree Awards for the Philippines competition, a filmmaker community initiative to celebrate and support filmmakers and film communities in Asia. Check out the rest here.

Article by Karen Wong in News on September 8, 2018