In Memory Of Her Late-Grandmother Who Suffered From Dementia We speak to director Clare Chong, an undergraduate from the Lasalle College of the Arts, who made ‘Please Dream Of Me’ in line with the theme of “Beyond 2020” for the second season of 20/20: The Temasek Short Film Project.

‘Please Dream Of Me’ is a story that is deeply personal to Clare, as it was inspired by her late-grandmother who suffered from dementia and had spent her last days in a nursing home.

Her team’s mentor, K Rajagopal, shares his thoughts on working with her: “Clare and her team approached filmmaking very honestly. They never hesitated to keep it organic and dynamic. Clare doesn’t compromise. She is unflinching to a fault, which I admire most about her.”

As this season’s theme encourages filmmakers to express their views and expectations about the future, Raja found that the teams he mentored both revisited the past to speak about the future.

“Sharing my filmmaking experiences is a joy. Being part of Temasek 20/20 allowed me to interact with a younger generation of inspiring filmmakers who were definitely inspiring. By coincidence, both teams I mentored revisited the past to speak about the future, looking at lost and forgotten memories that have shaped the present, about selective memory, and about forgetting the past.”

Read our interview with Clare below: Clare (right) on the set of Please Dream Of Me

1 – Hello Clare, tell us a bit about yourself!
Film is a like a drug; I’m completely addicted to it. Everything I do is related to filmmaking, whether I’m working on a narrative film, a music video, commercial projects, reading a book or listening to music. I think film is beautiful, because of the many varied of working parts in it and because I get to work with so many different great minds on a daily basis. Behind the scenes at the set of Please Dream Of Me

2 – How did the storytelling bug start?
I sang opera and was a music major at the School of the Arts Singapore (SOTA). It was through a media education course that I discovered my interest in film. We were tasked to analyse films, write scripts and shoot a short film. The short film was really horrible, but I got hooked by the process. I enjoyed working with my peers who were majoring in other art forms. I realised that this was something that I felt truly passionate about. I then switched my major to film. The first film I fell in love with is ‘Mystery Train’ by Jim Jarmusch; other films that influenced me deeply are ‘Blue Velvet’ and ‘Twin Peaks’ by David Lynch, ‘The Holy Mountain’ by Alejandro Jodorowsky, ‘A Clockwork Orange’ by Stanley Kubrick, ‘Cemetery of Splendour’ by Apichatpong Weerasethakul, ‘Cloud of Unknowing’ by Ho Tzu Nyen, and ‘Persona’ by Ingmar Bergman.

3 – What was it like to imagine a future in the theme of Beyond 2020 and how did you arrive at the depiction of this future in Please Dream Of Me?
At first, I thought the theme was science fiction. I was against it because that wasn’t what I was interested in, nor was I good at. I wanted to write something more dystopian or steampunk as that I was interested in that aesthetic.

Of course, you don’t always end up with what you imagined. ‘Please Dream Of Me’ is completely different from what I originally thought I would do. I wrote the script, but both my teammates Aaron (director of photography Aaron Andrew Ang) and Xin (producer Koh Yu Xin) played a big part too. They were very supportive. They gave me feedback; they were extremely critical about it. That helped me learn a lot. 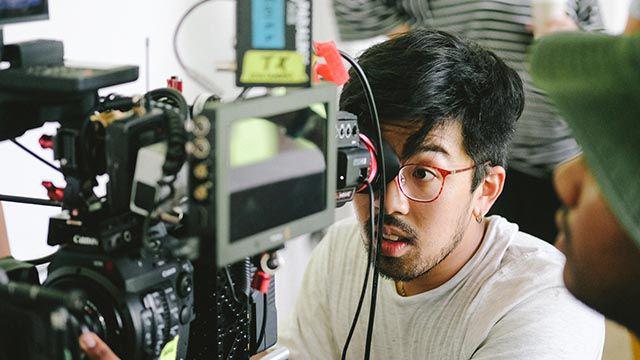 I decided to focus on dementia, an issue that is personal to me as my late-grandmother had it. I only realised how much it impacted me recently. When I started to study and read more about dementia, what really struck me was reading about the pain and suffering of dementia patients and their caregivers.

I wanted to translate that into a film. I decided to focus on the relationship between a nurse and a patient as stories on the broader issues and symptoms of dementia have been done before in film.

I was also in the midst of a break up when writing the script. I tried to forget the pain and erase the happy memories (of that relationship). That made me question happiness, what was happiness? How can one truly experience happiness without experiencing pain and sadness? That became a question in my film. A good part of the film contemplates on the right to erase someone else’s memories and replacing it with happy ones so that they can die peacefully. 4 – What were your biggest challenges working on Please Dream Of Me?
For me, it was the expectations. I am not used to conventional scriptwriting processes. Writing and thinking are intuitive for me. I don’t plan a structure; I dive straight into it. I was expected to work a certain way because there is so much structure and funding behind this. I had to unlearn a lot of the things I taught myself to do.

And when you’re the one steering the ship, there is an immense amount of pressure. Everything at the end of the day falls on the story and the director. It was very daunting to steer such a big ship. 5 – How did you develop the character of the nurse and her moral dilemma?
I was still quite young when my grandmother was alive. I didn’t understand her condition. I didn’t take the effort to care for her and treasure her when she was alive. Perhaps (the guilt that I’m having now) is only recent.

Maybe my film is a way of thanking her for being part of my life, and an apology for not being there in her last days. I always imagined how she was taken care of in the nursing home as she became very violent and it was unsafe for to have her live with us.

It hurts when I think that the nurses who care for her might have abused her or not cared for her with a human heart, or if they were simply just doing their job. I hoped that there was someone who truly loved her (in the nursing home), but I don’t think that’s true, sadly. 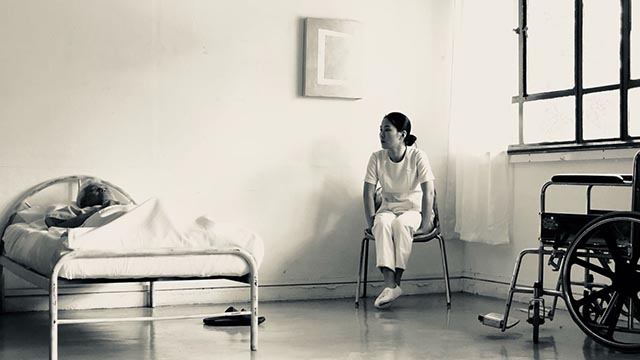 A scene from Please Dream Of Me

I projected this on the nurse’s character. I wanted the nurse (in the film) to embody what I hoped was my grandmother’s nurse in the nursing home.

Regarding (the character’s) moral dilemma, it was about questioning the right and authority to dictate someone life, and about the right to determine that an individual no longer has the right to their own opinions and memories? Is it when they lose the ability communicate, to remember?

6 – In your opinion, what is the relationship between happiness and memory?
Memories contain the happiness, the sadness, the anger, fear, and everything in between. If you don’t have the memory of sadness, how can you compare it to what happiness is?

Without memories, you’re a blank slate, a newborn child, unable to form any association with the world. I think that is the saddest part of dementia — especially for a caregiver — is when they have to witness their loved ones decline this way. 7 – In your opinion, how far are we from this future you depicted? Has this already manifested itself?
Of course, I hope my depiction is only fictional, that no one can ever be able to erase another person’s memories. That said, I don’t think we are too far off from this future. And if that is the case then we can’t fear nor stop it; we have to embrace it.

8 – Why did you decide to participate in Temasek 20/20?
I was actually hesitant because I already committed to many projects and also worried that I wasn’t competent enough. My teammates urged me to try and I did in the end. I’m glad I did because it was a wonderful experience and it had such a steep learning curve. I’m also glad I got to tell a story that I hold the closest to my heart.

9 – You were mentored by K Rajagopal while making this film. What’s your biggest takeaway from that process?
I think that he is an amazing mentor. He is a very sincere, friendly and committed person. I respect his ideas, strong opinions, and the way he works very much. I was definitely scared too, because we are both very opinionated and sometimes will go at loggerheads — which I actually enjoy, because what is creativity without any conflict?

The biggest takeaway from this was that someone is willing to support my vision, all the way. I had a lot more confidence (working) with Raja. He is very strict, but he was also reassuring and respectful at the same time. He understood my ideas, took the time and effort to understand me as a person and my way of filmmaking and he never imposed his ideas on me.

It truly is tough love, and I appreciate that.

10 – Creatively, and personally, what was your biggest takeaway from the Temasek 20/20 experience?
I’m glad to work with my teammates and crew. Everyone put in so much effort to make this happen. There were many setbacks, there were steep learning curves, but the challenge brought us closer together as friends and creative collaborators.

I’m also lucky to have Raja as my mentor. Without him I’m very sure I wouldn’t have developed my film to what it is now. I wouldn’t have been as critical about my films and what I am trying to say with them. I’m also glad that I got to know him better now as a person and as a filmmaker.

I’m also grateful to have been able to make ‘Please Dream Of Me’. It is a very personal story that saddens me whenever I think about the situation my grandmother was in. To be able to express that, to a certain degree, is probably the last thing that I can give to remember her by.

Catch Clare’s short film at https://twenty20.temasek/ when Season 2 launches on 29 May!

This Nurse Could Wipe Away His Unhappy Memories, For All Eternity Dogs and dementia, do they go together? In this short film, they do.
Cashier Aunties Vs Robots – Who Wins?
Is It Dementia? Or Forgetfulness?
Her Husband Was Leaving Her. She Gifted Him One Last Sweet Memory.