A scene from Gold winner ‘Caterwaul’ directed by Josel Fajardo

The awarding ceremony was held at the Film Development Council of the Philippines (FDCP) Cinematheque Manila, attended by filmmakers, industry professionals and members of the media.

A scene from Silver winner ‘Redlights’ directed by Christian Lat

The judges said of the films: “We commend ‘Caterwaul’ for the simple story and strong performances from the actresses, and their delivery of the storytelling twist. With ‘Redlights,’ we found the story timely and relevant and were impressed with the complex characters and high production value. It demonstrated a thirst for cinema and a refreshing insight on the Filipino social climate.

“We found ‘Maybe Aliens’ deserving of a special mention, for its aesthetic and creative direction and the exploration of an innovative and unique form of storytelling.

“Overall, we were deeply honoured to have a glimpse of all the Pinoy talents presented at this Viddsee Juree for the Philippines competition, as all finalists demonstrate great promise and expectation for their future careers.”

A scene from ‘Maybe Aliens’ by Glenn Barit, which received a Special Mention

Fajardo wins a Blackmagic URSA Mini 4.6K Digital Cinema Camera EF worth US$4,995 and a five-day film immersion course in Los Angeles sponsored by the Motion Picture Association. Lat goes home with a Blackmagic DaVinci Resolve Micro Panel worth US$995.

This edition saw a selection of finalists from a outstanding crop of new filmmakers from different schools such as the University of the Philippines, Far Eastern University, Mint, College of St. Benilde, Letran, and International Academy of Film and Television.

Fajardo is a director and cinematographer and an undergraduate at the Far Eastern University. With ‘Caterwaul’, Fajardo hoped to “show the reality of objectification experienced by women.” He collaborated with scriptwriter Jennifer Leoncio to tell an intimate and explosive story of exploitation, delicately grappling between representing a woman’s perspective and the “male gaze”. 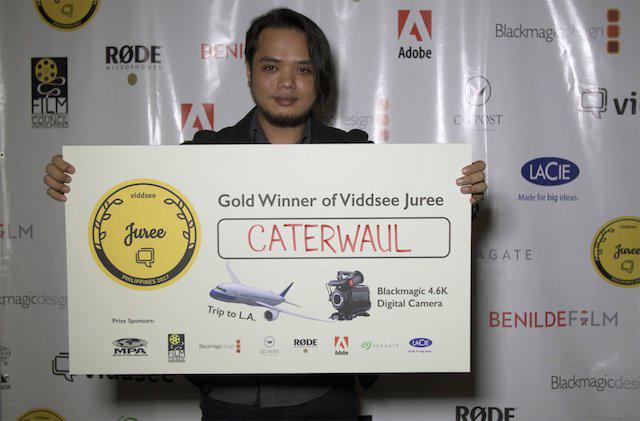 Josel Fajardo, Viddsee Juree for the Philippines Gold winner, is in his last semester for his AB Communication studies at the Far Eastern University

Lat grew up in the Philippines and Canada, and ‘Redlights’ was his thesis film for the International Academy of Film and Television (IAFT). ‘Redlights’ is a thriller set in the seedy underbelly of Manila, and inspired by the hustle of taxi drivers in the Philippines. Barit’s ‘Maybe Aliens’ (‘Aliens Ata’) is a familiar story about the Filipino diaspora told from a different perspective, as it was shot entirely by drone. Viddsee Juree Awards for the Philippines is an initiative by the entertainment platform Viddsee to celebrate and support filmmakers and film communities in Asia. With a growing Filipino audience and an expanding network of creative content producers from the Philippines, this initiative aims to bridge the gap between digital filmmaking and distribution by working closely with local film communities.

It was launched four months ago to encouraging response through an online campaign and offline roadshows in Manila, Luzon, the Visayas and Mindanao. The competition culminated in this weekend’s awarding ceremony, forums moderated by film critic and journalist Oggs Cruz, and actor-writer Lilit Reyes, a cinematography workshop by Blackmagic and a post-production workshop by Da Vinci Resolve, and a series of short film screenings and panel discussions.

The winning films, finalists and and out-of-competition short films are all free to view on Viddsee.com/channel/juree.