Isabella Policarpio is a 22-year-old aspiring filmmaker from Manila, Philippines. A Communication Arts graduate from De La Salle University, her life-long dream is to become a writer/director.

With the creation of her short film ‘Refraction’, she inches closer to making that dream a reality. ‘Refraction’ is a short film about a contemporary dancer trying to heal from the childhood trauma inflicted by his relationship with his father. It’s an in-competition film for the Juree Philippines 2019 edition.

She talks to us about the making of ‘Refraction’ and the many tears she shed through the trials and tribulations of completing the film. Could you talk us through how you arrived at using Refraction for your film title? We wanted a title that not only caught the gist but also the whole theme of the film. We originally had a French title but we found that weird and decided against it. We researched on the aspect of mirror reflections in our film and found ‘refraction’. It means the bending of light when it enters the eye; how light changes when passing through an object.

We related it to the main character’s circumstance in the film. And how certain life events worked against him and forced him to bend accordingly. Sometimes, the bending of light results in beautiful things like rainbows. I’d like to believe that Red’s experiences, no matter how hard, will lead to something beautiful eventually.

How did you come to develop dance as the creative expression and direction in this piece of work? Was it done collaboratively with dancer/actor Ricardo Magno? The cast & crew after the first day of their shoot

Refraction was a thesis film I did with two partners, one of which is a contemporary dancer herself. The one thing all three of us had in common is that we’re all artists. We often discussed how we each overcame our personal struggles through creating art.

We considered dancing a form of art as well and we view it as a very visual way of expressing oneself. We agreed that dance would be a creative and beautiful way to capture one’s hurting and healing in a language that would translate well on screen.

We never got to meet our main actor until after the auditions. We never knew how difficult it was to find an actor-slash-dancer who would also fit the vision of Red that I had in my head. We were so close to giving up when, finally, Red emailed us. We knew it was going to him.

What is the conversation you wish to trigger about trauma, hope and healing? Healing is a personal journey. No one can dictate how or when you’re going to overcome your trauma. I wanted to show that the healing process is nowhere near quick and easy and no way is it beautiful. Sometimes, it is an ugly and messy journey that will need you to face your demons and reopen old wounds, no matter how painful it can be.

Like Red, most of us are afraid of facing our traumas because it would mean facing the realities and consequences of pain. Healing is never easy, but it is necessary. I hope our film can show everyone that no matter how painful the healing process is, it will always lead to better things but always at your own time and pace.

Tell us a bit about yourself and your team! We aren’t quite sure how the three of us got together and made a dance film together but the one-year filmmaking process was an insane journey that we still talk about to this day. We spent too many late nights in coffee shops and crying in various places.

We encountered so many problems and disagreements. But I believed there was one important factor we each had that made us a good team – we were all insanely passionate. No matter how scared or doubtful we got, we ended each night still believing in our film and pushing each other to kick ass again the next day. After every breakdown or argument, we would just get back up.

It was everyone’s determination and passion that empowered us even when everything seemed futile. We were also lucky to have a mentor who believed in us and to have met other talented and passionate filmmakers who helped us bring our vision to life. If anything, making this film was hell but we’re glad we did it with the right people.

What were your main challenges were in putting this together and how did you overcome them? 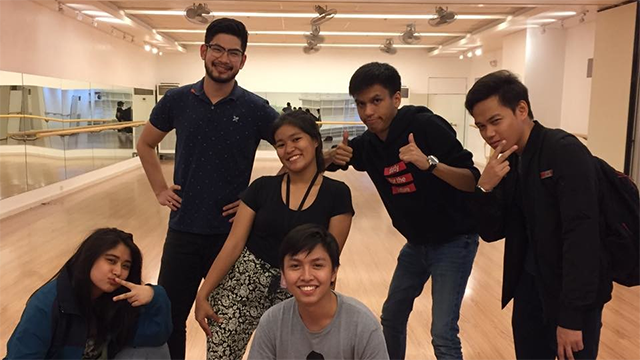 For some reason, no matter how much we prepared and over-prepared, the universe would always find a way to ruin things. On our very first shooting day, our van got stuck in the flood in the middle of nowhere at 4 AM in the morning.

On our second shooting day, everyone except the three of us and our main actor backed out the night before. We were forced to cancel the whole thing and delay our thesis and we spent the whole night crying together. On our third shooting day, our child actor got scared and decided to stop acting. A few hours before our thesis defence, our film had technical difficulties.

For some reason, things never went according to plan and there was always something out of our control. But we knew that this was all part of the filmmaking process. It was always all about adapting to change and learning how to compromise. Also, we always gave one another five minutes to cry it all out then get back to work. If anything, it all made for funny stories to look back on.