Whenever someone mentions the word ‘inspiration’, who comes to your mind?

Some people might think of business magnates and philanthropists like Oprah Winfrey, Bill Gates, or J.K Rowling. Others might look up to influential change-makers like Mahatma Gandhi or Lee Kuan Yew. Or perhaps you thought of your close friend or family member who’s had a significant impact on your life?

It’s hard to pick just one person that you look up to and whose success you want to emulate. That’s the struggle young Afiq faced when his teacher asked him and his classmates to bring an inspirational family member to school for their show-and-tell session.

Afiq’s conflict: to pick only one family member as his inspiration

Afiq doesn’t come from a family of lawyers, doctors or businessmen. His sister works relentlessly to become a better dancer, despite all the awards she has already won. His mother, a full-time teacher, gives free tuition classes after work although she is tired. His father is taking extra classes to upskill himself. Who will Afiq bring to his show-and-tell?

That’s the story that filmmaker Rifyal Giffari was tasked to tell in the short film entitled My Inspiration (Inspirasiku). In this interview, Rifyal talks about working with child actors, the creative process, and reveals his very own role model.

What was your creative process in telling a story from a boy’s (Afiq’s) perspective in Inspirasiku?

A scene from My Inspiration (Inspirasiku)

The same way you would try to do any story – trying to keep it personal and putting a human perspective. You have to do this whilst always keeping an eye on balancing these anecdotes with the message of the overall campaign, which can be challenging. For this instance, it was just trying to find similar instances or basing situations from experiences and people that I know.

Ayah’s story is very familiar to a lot of people’s fathers and is the story of my parents, who both never went beyond secondary school. In fact, my mom stopped at primary school, but they’re still constantly trying to improve themselves in their work so that they can provide for the family. They have a hunger for learning that’s beyond just academics too.

Ibu is an amalgamation of several people that taught me tuition, which included my neighbour whose results was always top of the entire school alongside some cousins, and uncles who would take their evenings or weekends off just to teach me. And just like Afiq, I didn’t really appreciate it until later on, when I took a step back to see their sacrifices.

It’s also my first time working with another screenwriter, Danica. Whereas previously, if I was stuck or unhappy about a part of the script, I had a hard time overcoming it. But with another writer, we were able to figure out if the problem was in the script or just in my head, whether it was something I wasn’t sure how to film yet or if I was simply overthinking something.

Writing can be a very solitary process, but when you’re co-writing it takes a whole new dimension. When something resonated in both of us, we knew we were on the right track.

How is directing a child different from directing an adult? Are there marked differences to what you would do technically that the ordinary viewer might miss?

I’m not sure that I make too many conscious difference in approach. I’ve done several shoots with kids now and I talk to them as openly and directly as possible. But it doesn’t matter what your age is, people often respond to openness. You have to have an exchange of energy, and with kids, I think that’s easier. If you’re open with them, they’re open with you. Adults tend to be a bit more guarded.

I avoid trying to ‘dumb down’ or simplify my words when I give directions. But when I do use jargon they might not understand, I’ll clarify and teach them what the word means. People often fall in the trap of being patronising to kids, and I tend to cringe when that happens. If they can speak and listen, they can understand you perfectly well without striking up a childish tone.

Focus and energy is something that is probably the only major difference for me. This shoot was tricky in that regard as it was already taxing just because it was a film with a Malay/Muslim cast shot during the fasting month. Added to that, Latiff the actor who plays Afiq was feeling under the weather on the very first day. For me, children’s attention span and energy, to be in ’the zone’ are slightly more limited.

So the most important thing was just getting them lightly rehearsed as late as possible and to finish the scene as quickly as possible. This is, of course, true for any actor but adults have a bit more rigor and with experience or training, they can come in and out of character and moments a lot easier between set-ups.

My Assistant Director June and Assistant Producer Felicia were lifesavers as they were really good at keeping everyone’s energy and attention up as well, trying to make the time feel shorter for the kids by engaging them when we needed to do adjustments here and there. The last thing you want is a room full of restless, tired kids seeking validation.

We enjoyed ‘Guiding Light’ and ‘A Spectacular Sight’ on Viddsee, as we did for ‘Inspirasiku’. Your family-oriented films have a considered tone and outlook on family and relationships. What family values did you hope to demonstrate through these films as well as in Inspirasiku?

Most of them tended to be about miscommunication or misconceptions about one another. I think a sense of open communication is probably what I’m trying to get at. It’s an odd thing for Singaporean families, where you live and breathe in the same space for so long, but you’re barely scratching at the surface of what the other person is truly thinking. You just assume you know and that’s where most of the tensions and conflicts play out.

Could you share with us who in your family is your inspiration? I’m going to go with Afiq, and pick everyone. It would be odd for me to make any other choice after all the effort I made with the film.

My family doesn’t give up. I’m always impressed that we all have different struggles but we are all quite stubborn. We can meet roadblocks but we tend to want to keep moving forward regardless.

What were some of the differences and similarities across the various ‘role models’ in the film?

Not giving up. Kakak can be hurt, Ibu can be tired and Ayah can be less educated, but they seem to always be looking upward and carrying on. They’re not victims of their circumstances. All of them are just trying to do the best they can with what they have.

Even Afiq is constantly trying to make sure he gets the right role models to bring when he could have easily just picked Kakak, who was the first role model he encounters.

A scene from My Inspiration (Inspirasiku)

What is your definition of “success”?

Wrapping up a film shoot exactly on schedule. I think wrapping too early means you probably didn’t work hard enough, whilst wrapping too late means you didn’t plan well enough. If I wrap just on time and got what I needed on set, I sort of feel the battle is halfway won.

Do you think Afiq’s definition of ‘inspiration” and “success” is the exception or the norm?

Unfortunately, I think it’s an exception. I think we could do with a little bit more appreciation of our smaller victories and being able to fully appreciate them. There are too much comparison and competition in the way we live our life, we tend to only look towards over-simplified measurements of success – money and status, neither of which are all that good benchmarks of a life well lived.

What do you hope the audience will take away from this?

I hope they learn to appreciate their own journey and victories. There’s no set way to be, as a person, adult or professional.

Could you share with us some words of wisdom to dreamers out there?

Keep looking forward. Butterflies don’t think about being caterpillars. They simply fly on. 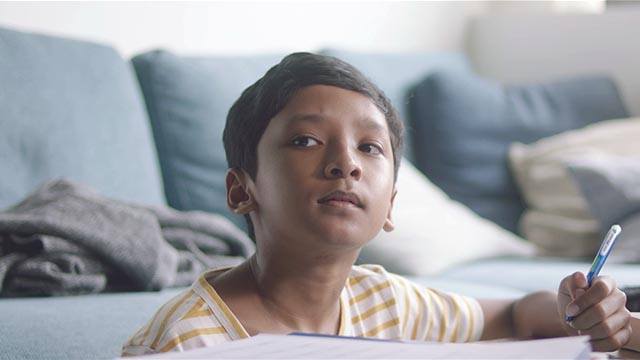 Who Do Our Children Look Up To?
Do SG Filmmakers Have A Colonial Hangup? Rifyal Giffari Wants To Know
Rifyal Giffari On The Business Of Social Media in ‘Queen Of Hearts’
In His Own Words: Rifyal Giffari on A Spectacular Sight
Spotlight: Singaporean Filmmaker Tariq Mansor On Walls