Rifyal Giffari has directed many short films, but ‘Queen Of Hearts‘ marks the first time he worked collaboratively under a showrunner, JD Chua.

The director of ‘The Assistant’, episode four of the new Viddsee Originals web-series shares more about this delicate process and how he conceptualised the ruthless character of Charlie, the talent agent.

Q1. How was the collaborative process of making this film for you?
There was a bit of threading the needle, of keeping to the script and story choices, since each episode affects other episodes. But it wasn’t completely restrictive.

You have to balance following the grand plan of the series as well as invoking some life and spontaneity into the scenes. Or else things get very manufactured. I cut a lot of scenes when we were shooting when things weren’t working. As much as possible, I always try to induce conversations and suggestions from the actors and crew.

It was pretty interesting to see how other directors go through their work as we’re not usually able to sit in on each other’s process and methods.

Even small things like scheduling meetings. We rightfully, and practically, have big meetings for this, with everyone involved. But I always preferred meeting one on ones. So there was a lot of learning experiences here. It was cool. 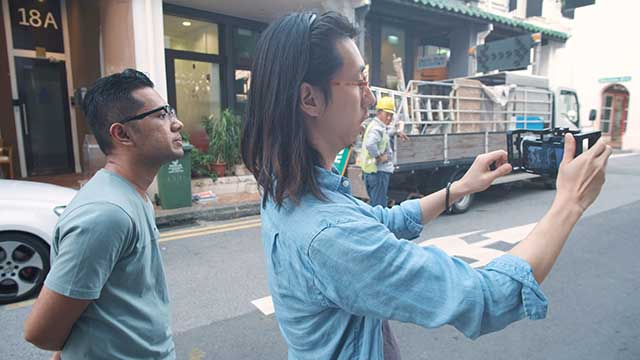 Behind-the-scenes with Rifyal and James Hia (Director of Photography)

Q2. Charlie exemplifies the cold, cruel business of social media. Could you elaborate on the process of fleshing out this character?
It was a matter of looking back, dreaming about how she got where she is and having conversations with Adele Wong, the actress in rehearsal. Everyone has thoughts about the character, so you find nuggets of possible ideas to shape and mould together.

She’s a survivor, in a difficult, competitive field. She worked hard to get to where she is, and she doesn’t believe kindness is a practical survival strategy. It requires trust, patience, loyalty; things she doesn’t do well with or have much. She’s a person of logic and finds the world is cold and indifferent. So she adapted to it. 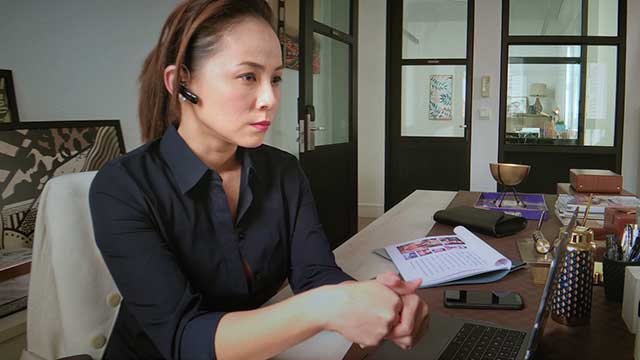 But of course, Clara is there to challenge that. In a way, Tori’s disappearance does as well.

The iPhone has a special quality that is inexplicably antagonistic to being presented as a generic film, that can reach above the novelty aspect. It should be taken up more seriously, by people looking to go against the conventional style of filmmaking. People rightfully keep talking about how amateurs should use it as a start. But I’m more interested in having experienced directors use it. We’ve seen Park Chan Wook, Steven Soderbergh, Zack Snyder and Sean Baker shoot on older iPhones, and some of it is quite wild.

We keep saying this technology has democratised filmmaking. But it’s not really democratisation if only amateur filmmakers make films on iPhones and everyone else still uses an ARRI Alexa.

Some people have an emotional and philosophical obstacle when it comes to the size and cost of their cameras and the traditional methods of making film. To step away from that takes a deal of courage.

Q4. What do you hope for viewers to take away from this series?
I hope they have some fun at the very least. Maybe have a little think about your social media interactions. The global community’s rules are still being written, but having some cognisance would be a kinder way to live.

Q5. What’s next for you?
A holiday wouldn’t go amiss.

I’ve been spinning a few plates for a while now, developing some ideas. But I try to do what seems most interesting or urgent, although instinctually I feel like it’s been quite a minute since I did a fantasy/horror project. A genre series could be worthwhile for this itch in my soul.

Watch ‘Queen Of Hearts: Ep 4 – The Assistant’ by Rifyal Giffari and JD Chua (Singapore) on Viddsee:

Keep watching Queen Of Hearts: Episode 5, The Victim, where the truth about Tori Leong’s disappearance and who’s behind it is revealed.

Alistair Quak And Benjamin Low Unpack A Jealous Social Media Spiral
Tang Wan Xin On Obsessive Fandom In ‘Queen Of Hearts’
JD Chua, Creator Of “Queen Of Hearts”, On The Unsacred World We Live In
An Influencer Is Found Dead. Her Manager Is Strangely Indifferent.
The Popular Social Media Influencer He Impersonated Went Missing