“I Robbed Her Of Her Youth” – JD Chua On His Mother In JD Chua’s open letter to mothers, the director admits that he has “robbed [my mother] of her youth.”

The startling but powerful statement is one of his reflections from making ‘Light By Bedside’, JD’s latest film that is inspired by his childhood.

A scene from ‘Light By Bedside’

The introspective film follows a young boy who learns a life-changing lesson from his busy single mother. JD drew on several events from his childhood to make this film, with the intent to honour his mother’s inspiring sacrifices.

In this interview with Viddsee, he shares more on his candid confession, his love for genre films as well as what his mother thinks about the film.

‘Light By Bedside’ is a deeply personal one for you. Did you have any reservations in creating this film?

It’s ‘inspired by’ and not ‘based on’, so I already censored the most embarrassing moments!

When I was afraid of the dark, my mother inspired me to find my inner courage. What my mother taught moved me and I have applied her philosophy through my adult life, about knowing myself and standing up to those who don’t believe in me, about finding the courage inside to face my own fears.

Boy, played by Nathaniel Ng, in a scene from ‘Light By Bedside’

In your open letter, you mentioned that “I had robbed [my mother] of her youth and constantly caused her anxiety”. Could you expand on this?

My mother was a fun-loving, adventurous and daring woman. That spirit got chipped away after my father’s passing.

I remember vividly that I saved up money from my allowance and bought my first CD. My mother found out about it and she strangely apologised that I had to pay for my own stuff.

I thought this was supposed to be the norm and I found this behaviour strange. I think it was because my father had passed and she was actually apologising for the inevitable change in my youth.

I had to grow up on my own half the time. She hardly had any idea what I do or where I go in the day, thus making her worried about my wellbeing. I was a terrible student, producing bad results in school. She had constant worry about my education too. Now as an adult, I reflect on how she could have an easier and less stressed life if I provided more assurance.

It is easy to say that it is a parent’s job to worry. Looking back, I should have been a better son.

Watch ‘Light By Bedside’ by JD Chua (Singapore) on Viddsee:

You’ve made many films in the past, particularly action and horror genre films. How different is the process to making this family-centric film?

Half the time, I constantly had to restrain myself from making it too “genre”. I had to keep telling myself to go slow and remain focused in being true to life. Be even truer to life. Be a fly on the wall and just watch.

The other half of the time, I just had to recall what was it like in the past for me. Jasmine Tay (the producer) had secured a location in Yishun, where I grew up in, so it was easy for me to work in that space.

To be honest, I wasn’t going in the direction of making a family-centric film. The throughline for me was a story of a boy and what lesson his mother taught him. I just kept reminding myself that nothing else is important, except that lesson.

Also I had a good team. I am nothing without them and their expertises. I relied heavily on them to help me through.

What were you surprised to learn in making this tonally different film?

It is so much easier to make light and observational dramas compared to making action or horror films. It is a much more relaxed set, everybody goes along steadily. I hope I get to do more in the future.

How has your mother or family reacted to this film?

My mother does not know about this film though she knows the general idea that I’ve made a short inspired by our past. I’m going to wait till the film’s release to see how she feels about it.

My cousins haven’t said anything. Yet. They were very supportive during the production though. We shot in the same block and my cousins helped. 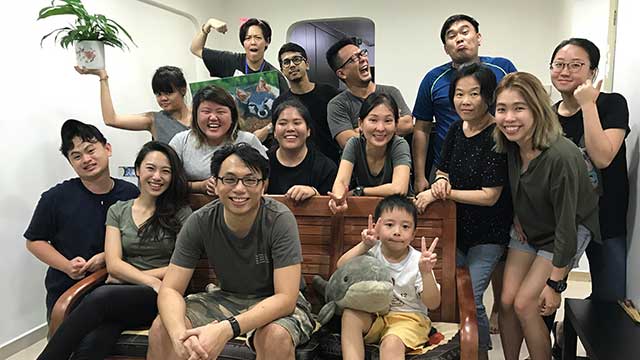 In making this film, you assembled a women-centric crew. How can film production crews be more gender-inclusive?

Well actually, calling the crew a women-centric crew is wrong too. We must take the first step to start seeing them as humans first, and then their talents and skill sets. Gender shouldn’t come in the way of the decision to hire.

For this film, I was simply aiming for this film to be “raised” by women head of departments to reflect my childhood.

What was it like working with Oon Shu An?

She was a joy to work with, highly adaptive and collaborative. She helped evolve the script into something much better. I like actors who chip in their input and workshop ideas to bring out what message we want to share through the film, and Shu An is very much like that.
Actors are as much of the storytelling process as the writers, producers and directors.

During casting, how did you land on Oon Shu An and Nathaniel Ng to bring your story alive?

During the script reads, it was obvious both worked incredibly well with each other. It helps that Nat listens to instructions (this boy has ideas better than mine!) and follows them to the tee.

Most of the work is done during prep. We spent time together, getting to know each other and workshop scenes together. I find chemistry and comfort much more important during this time.

What is your favourite memory growing up?

I remember traveling as a child. Going into the airport and flying to Bangkok on my own to meet my extended family. Adventures like these were fun. My mother sent me there. I guess it was a good break for her and a good experience for me to grow up independently.

Could you share how making this movie has informed your view of parenting for the future?

Parenting is hard. It is a thankless job (if you get a kid like me) and one must be fully committed to raise a child. The phrase “it takes a village to raise a child” is totally right.
I don’t think I’ll ever do it unless I have a support system in place, from my wife/partner and our families.

Oh by the way, nagging me and/or my wife (when I have one) about having a child will just make me more hesitant to have one.

One thing is for sure, having a helping hand helps. If parents can rely on each other, bringing up a child can be rewarding. I have no idea how single parents do it. And this is a sad pattern. There are so much families divided by divorce and death.

‘Light By Bedside’ is a Viddsee Originals production, and part of the Scene City anthology of short films from Singapore.

An Open Letter To Mothers, Mother Figures And Mothers-To-Be
He Wants To Be Just Like His Beloved Grandfather…But His Mother Disapproves