Tim Rone Villanueva is a filmmaker and founder of TV Films, a Filipino film production outfit known for producing short films. The Benilde alumni is also a co-owner and board member of Cinema Centenario Inc., a microcinema in Quezon City that promotes Filipino Cinema. We find out what inspired him to create his successful and unconventional short film ‘Santa Nena!’, which won several awards in local film festivals such as the 2018 CineFilipino. Santa Nena was inspired by stories from his hometown 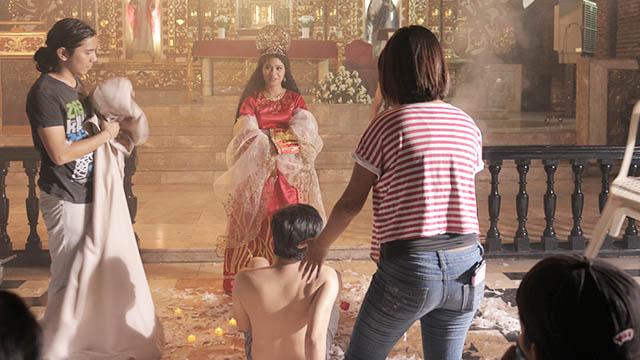 Saint Nena! was Tim’s final project as a film student. “As my last student project, I was motivated to tell a story that was unconventional, personal, related to God and close to my origin.”

Observing his hometown, Tim saw the obvious. He was going to tell a story about the folklore and legends surrounding a saint his family commemorates, Saint Mary Magdalene of Kawit. “There were stories about her coming alive and roaming around town. According to some witnesses, she had long black hair, a red gown and a beautiful face. Then, I started to think – what if she was still roaming our town at present? What if she fell in love with a Kawiteño and bore a child?”

He then took that idea and experimented with different concepts around it.

He was very nervous about the film’s reception “I thought I would receive negative feedback, hate mail and complaints especially from the religious sector.”

But to his surprise, audiences applauded his film and commended his work during the live screenings. What people are curious to know is how the church permitted his story.

“I pitched an initial storyline to the Kawit parish church head and it was approved. But as it developed, the story and script were totally overhauled.”

That didn’t present a problem to Tim as he stuck to the core message of dealing with the erroneous worship of Catholic folk, and human desires such as love and lust.

He imagined being Santa Nena to develop Santa Nena Saying that, developing the character of Santa Nena required walking in her shoes.

“I tried to imagine what life was like as the statue of a patron saint, not moving at all and just listening to everyone’s prayers, agonies and needs.”

He then started to think about what she would be thinking. Like what if she wanted to retire, or if she was the one who was in need instead. “Let us remember that she was human too before she was canonized as a saint. That means she would have had weaknesses and personal desires too.” Tim also wanted to challenge the ideologies behind saints and their followers.

Challenges behind the scenes Being a newbie filmmaker at that time, Tim faced difficulties executing scenes that required visual effects. The film had no visual effects supervisor on set. When it got to the post-production stage, their visual effects artist told them that certain scenes were shot incorrectly.

“Only a few shots ended up being usable. Thank God, our visual effects artist and editors managed to save our film!”

The chemistry between the actors made the film The strong set of actors had really made the success of the film.

“Elora Españo beauty, sincerity and heart made Santa Nena a lovable queen. Ross Pesigan’s portrayal of Manuel reminded me of my high school adolescent self in need of love and sex going through puberty.”

Tim also credits Martha Comia’s acting prowess in bringing out Nena and Manual’s chemistry as well as Mailes Kanapi’s for giving a perfect performance of an old-fashioned provincial religious mother.

“Jelson Bay’s natural talent in comedy made his angel character witty and crazy which made my film outrageous! Rolando Inocencio also gave a remarkable portrayal of a sickly man and later on a sex maniac.”

Article by Viddsee in News on September 7, 2019