The saying goes that home is where the heart is.

For those who call Singapore home, here are three films that capture the notion of patriotism, the charm of the ubiquitous HDB flats, and the memories of home, place and play.

With National Day lurking around the corner, we thought it appropriate to highlight some films that wonderfully captures that which is unique about Singapore.

Remember those little erasers with country flags stamped on them? For many Singaporeans who studied here, they were a huge source of entertainment during recess periods.

We would always have “eraser battles” with our friends, and the goal of the game is to flip your eraser over your opponent’s. The winner would get the loser’s eraser.

Affording the erasers wasn’t much of a problem, since they were (and probably still are) dirt-cheap. But in ‘Priceless’, little Sam gets into a fight over an eraser, injures a friend in the process, and lands himself in trouble.

This is uncharacteristic of Sam because he seldom ever gets into fights. Even his teacher is baffled by his sudden outburst.

Why is this eraser so important to him? Watch and find out.

Tourists may know Singapore for Orchard Road, our famous shopping district, but it’s in the heartland that one truly gets to experience life in Singapore.

These Housing Development Board (HDB) estates are bustling with activity everyday: from the people shopping for groceries at the neighbourhood mall, to children having fun at the playground, families are often busy with some activity in the neighbourhood.

In ‘Flats’, director Ervin Han celebrates the quirks of our HDB estates. Senior citizens are playing chess at the void deck. A few blocks away, a funeral is underway. Kids are flying paper airplanes at the playground. The heartland is really ‘rojak’, but that is part of its charm.

The warm colour palette used throughout the film makes the HDB estates feel inviting and homely.

Though the older estates may lack the modern touch of the city, we think you will feel a lot more appreciative of them after watching this film!

Singapore’s playgrounds, much like its heritage, are fast disappearing.

For the latest short film by Royston Tan, one of Singapore’s most prominent filmmakers, a playground becomes the locus of memories and history.

Two brothers are in searching for the body of their dead hamster Vicky, which is buried in a playground. As they dig deeper, they uncover many items of interest, all of which belong to a bygone era (phone cards, anyone?).

There’s a fragility to the film, what with it being filmed at one of the oldest playgrounds here; many other playgrounds have been demolished.

Royston Tan is known for the acute pangs of nostalgia in his films, and Vicky carries on that tradition. It is obsessed with excavating memories and transporting us, at least briefly, back to a time past.

If anything, he reminds us that it is important to remember our past in order to pave a way for the future. 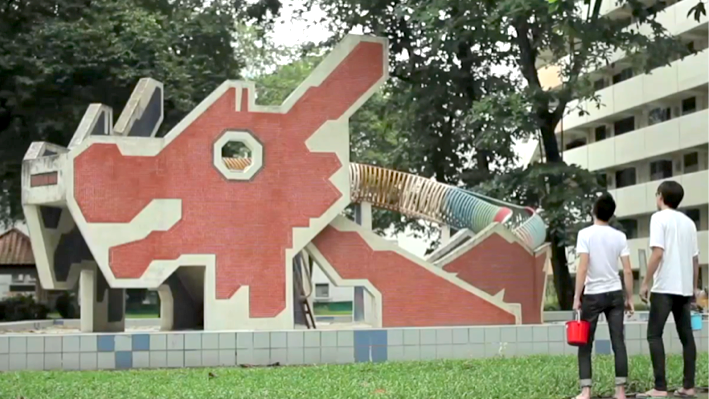 A Tale Of Two Cities, Two Boys & Their Imagination, Battling It Out
Short Films Honoured At Inaugural Viddsee Juree Awards in Singapore