As a country, Singapore’s clockwork efficiency is a matter of national pride; its bureaucracy is rated best in Asia. Is there space to be human when everything runs like clockwork? Is there room for the human in Singapore’s clockwork efficiency? A still from Breakdown

We speak to the director of ‘Breakdown’, Gabriel Isaac Goh, a story of a pair of auxiliary police officers at the mercy of bureaucracy and the curse of ‘Situation Normal’.

Gabriel’s film, selected to be in-competition for Viddsee Juree Singapore 2019, was made with fellow classmates from the Wee Kim Wee School of Communication And Information.

The story premise was based on Gabriel’s experiences working part-time as an auxiliary police officer as an undergraduate. What’s there to hate about Singapore’s clockwork efficiency?

We have a lot to gain when life goes as expected, as routine. The well-oiled system is also prepared for exceptions, but is Singapore bureaucracy prepared for human exceptions?

“The eventual story and motivations were shaped by our perceptions and opinions of bureaucracy in Singapore; how it controls, how it irritates and how it stifles us at times. But, as things pan out in the film, we don’t think it’s worth it to think otherwise,” Gabriel shares.

The two auxiliary police officers, Inspector Ong (Low Yeujia) and Lance Corporal Gamesh (Hari Kishan), are stranded in a remote location when their van breaks down. They are promised that help is on the way, but Gamesh is also anticipating the birth of his first child. The two are forced to question their duty to each other and their jobs. 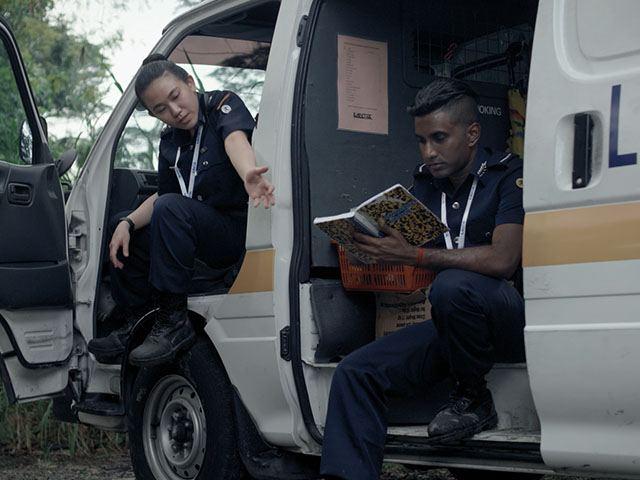 A still from Breakdown, Lance Corporal Gamesh (Hari Kishan) is anticipating the birth of his first child

Does the system tells us what’s right from wrong?

The system tells us right from wrong, but for whom is it right for?

The unseen “Chief”, whom they communicate with, represents the institutions that enforce this rigid bureaucracy, Gabriel explains, from the comfort of their high towers, out of sight from the ground.

“Inspector Ong’s character represents those who believe in the system in place. Even when placed with simple questions of morality, they use “the system” as a guide for what is right and wrong, rather than their own human empathy.

“Gamesh is obviously the biggest loser in this food chain, a slave purely for the money, he is an auxiliary police officer who does not seem to be interested in the peace and safety he provides this relatively untouched area of Singapore.

“His decision at the end is one that he has always been able to make – he has the least to lose in this situation. That can’t be said to be the same for Inspector Ong. For her, his leaving shows to her how the more she believes in this system of tidiness and “efficiency”, she has to forsake her thought-to-be easily accessible humanity.” 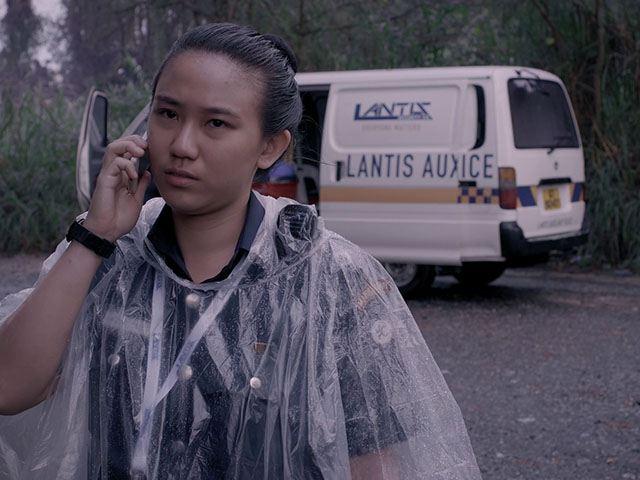 A still from Breakdown, with Inspector Ong played by Low Yeujia

The breakdowns in ‘Breakdown’

Man plans, and God laughs. And yes, there’s a God indeed, and he’s not just the unseen voice over the walkie talking. He’s the one laughing, but Gabriel and team made the best of it.

One of the production challenges was that they happened to schedule their production during one of Singapore’s coldest and wettest weeks in history, which was January last year.

“But as with all cinematic success stories, we incorporated the weather into the film and shot a hell lot of pick ups.

“Also, our production van, on the set of a short film about a van that was broken down, really did break down in the mud. At least that gave us a chance to screen test our tow truck driver!” 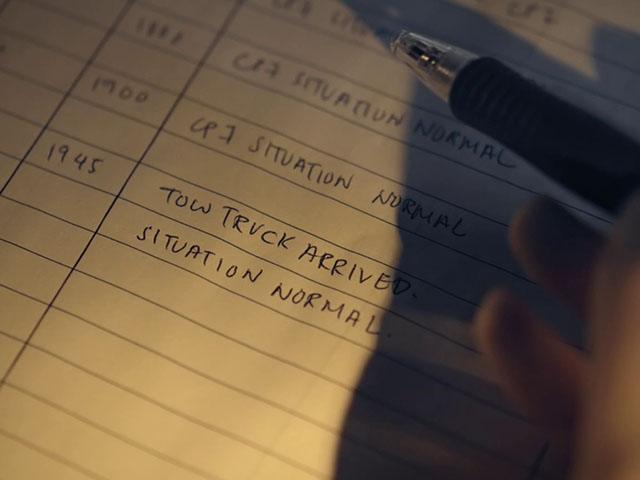 Situation Normal? A still from Breakdown by Gabriel Isaac Goh

As Inspector Ong dutifully notes every single entry of her occurrence report as ‘situation normal’, we ask Gabriel what constitutes as an abnormal situation, or SNAFU, with apologies for the abbreviated language.

“I think the term SNAFU does sum up the feelings of both characters in the film. A SNAFU is something that cannot be predicted. To us, it’s a term only used when it’s understood that all efforts to create a “Situation Normal” have failed, and those in the immediate vicinity have to deal with the fallout.

“Rarely in the higher echelons of companies and governments are situations declared as a crisis. It’s a norm in our modern-day to feign ignorance and write on our faces that situations are normal, even as bombs go off on our internal email threads.

“For us, that is what “situation abnormal” is, the act of pretending everything is fine, when it’s not.”

Article by Viddsee in News on September 8, 2019