Sohil Vaidya’s films have always been adamant in getting a message across. His most recent short-film, ‘Geeta‘, tells the story of a young girl who suffers from modern-day slavery – trapped in a home with no escape under the pretext of domestic help.

Giving a voice to homeless people and modern slaves

His first-ever documentary, ‘Diaries of the Unknown‘ revolved around the homeless community in India – highlighting their plight and hardship. It was screened at the International Film Festival of Kerala and sparked conversations about the issue, which spurred Sohil to make more hard-hitting films.

He then went on to make Difficult People, telling the story of a proud and stubborn father and son. Both of them have trouble expressing their love and end up suffering – which is a product of growing up in a patriarchal society. That film garnered him the Best Student film award from Directors Guild of America (D.G.A) in 2018.

We caught up with the University of Southern California (USC) School of Cinematic Arts student to pick his brains on how he tells such compelling stories. Hi Sohil! Thanks for having a chat with Viddsee.

Can you briefly walk us through your filmmaking journey?

The power and impact of moving images had always fascinated me. I saw ‘Jurassic Park‘ with my father when I was a child, and the experience transported me to a different spacetime.

While growing up, I always believed that being a filmmaker was not an ordinary person’s job. You had to have a lot of connections, come from a film family or be a rich kid and I was none of the above. So I chose a more traditional path and pursued a bachelors and masters in computer science.

While pursuing my computer science degree, I came across a theatre group in Pune. I helped out on the backstage productions for a few plays and acted in a couple. I thoroughly enjoyed the process.

My hunger for understanding art started growing. That’s when I started watching a diverse array of films. I started visiting the National Film Archives of India every day to watch more films and read more books about cinema.

I used to watch 3 to 4 films a day. I binged on every film I could find, from Russian masters to old classic Hollywood!

I started believing that cinema could be learned as an art form. I was excited to try my hand at it. I gathered a group of like-minded friends, borrowed a camera from a friend’s production company and started making a short, saying goodbye to my computer science career.

Tell us about your experience of studying film at USC. How has that helped hone your craft?

USC was a very open environment. I was never pressured to make a certain kind of cinema. That’s why I could truly discover my own voice in the multicultural environment at USC.

The whole point of coming to USC was to jump out of my own and learn to communicate with larger audiences. It’s interesting to get notes and criticism on your films from people with different cultural and ethnic backgrounds. That’s when we know what works and what doesn’t.

I believe that learning a craft helps you express your stories in a better way. Before USC, I had a lot of stories within me but had no idea how to put them together. Now I do, I think I can express myself as a director in a more profound way but still, there is so much more to learn.

I attended as many movies screenings I could and had debates about those movies afterward over dinner with my friends.

What does filmmaking mean to you?

I truly believe that cinema is the most powerful art form out there today. It has ultimate control over spacetime, unlike theatre or paintings or architecture. It can tell a story by combining visuals and sounds to create a deeper cinematic experience.

In the end, we tell the stories to affect audiences, evoke emotional responses that will change them as human beings, or shed light on the cultures, humans, and issues that we are not aware of.

Being able to touch someone that deeply, being able to change minds and create an impact on society is a profound feeling. We all strive to contribute to change in our own ways, and cinema is mine.

I would like to keep making films I am passionate about. My work will have to speak for me.

Let’s delve deeper into your films.

Your documentary ‘Diaries of the Unknown’ was very raw, real, and painful. How was the filming process for this? Thank you for your kind words. I made ‘Diaries of Unknown‘ when I knew nothing about filmmaking. Making a film when you are a blank slate makes it raw and real.

I was passionate about the issue. It was quite a process to befriend my subjects before filming them and we were a two-person crew. We used all-natural light; sometimes we bounced a mobile’s flashlight on the foam core during the night scenes. We literally had no budget.

Listening to their stories was heartbreaking. How can we solve this? How can we make all these lives better? There were so many questions in my mind, I’m still finding answers.

In your other film, ‘Difficult People‘ – focused on the strained relationship between father and son. Tell us more.

In patriarchal societies, men are subconsciously burdened to behave in certain ways. They try not to show themselves as vulnerable or tender. As the mother had recently passed away, they’re both trying to discover ways to communicate.

I showed them suffering in their own ways but in the end, they recognized the fact that they are just like one another. It’s a slice of life story, and there are themes about grief, masculinity, family and finding yourself in the world.

‘Geeta’ addresses one of the important issues of our time, modern-day slavery.

Around 40 million people today are trapped in some form of slavery. It’s horrifying. ‘Geeta‘ was created at a USC class about creating media for social change.

I’d heard and read about the cases of diplomats bringing their domestic help to the United States and eventually enslaving them using mental or physical abuse. I was interested in exploring the aspect of mental abuse more.

Slavery today still means physically entrapping someone, and that’s what we’ve learned and seen from movies and mass media.

But there is another type of slavery, where you leave a person with no choices to get out of their circumstances and cutting ties to mental freedom by making situations around them more difficult. That’s modern-day slavery.

What makes modern-day slavery much more dangerous is that it’s hard to recognize if someone is being enslaved without getting know the deeper context of their situation.

These situations range from forced labor-related slavery to forced or early marriages. Traditional slavery would be easily identifiable but modern slavery is much more complex than this.

There are many like Geeta who are trapped in homes that they are working in. Is there a way out for them?

Geeta is not a slave because she is bound by chains; she is a slave of her current circumstances. That’s the most tragic thing about modern-day slavery. If she escapes and goes back to India, she is free but has a life ridden with poverty.

So, is she really free?

We have so many intertwined problems. Poverty, illiteracy, unemployment, disparity and the list goes on. I don’t think we have an easy or convenient answer. 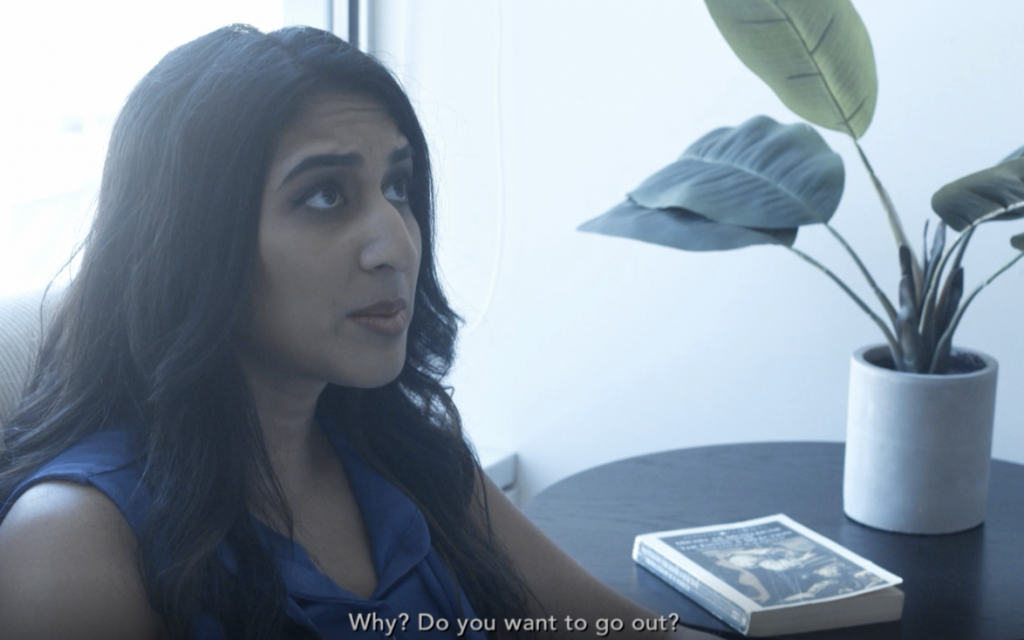 Is there anything Geeta could do to free herself? How can people around her help – like the plumber for example?

She gives it a go and she could’ve been successful, but instead of leaving the apartment, she chose to sacrifice herself for her younger sister. That’s what makes it ironic. It’s an interesting question: what can people around her do to help her?

There is research on how to recognize someone being enslaved or not! If a person appears to be under control of someone else, are not able to move around freely, are reluctant to talk to strangers, appears frightened, withdrawn and/or show the signs of physical and mental abuse; your alarm bells should ring!

There are multiple helplines to call the authorities and provide them the information about the suspected person. There is so much we can do if we are conscious and aware of our surroundings.

You recently completed a feature called ‘Samir‘. Tell us more!

‘Samir‘ was made in collaboration with 9 directors, where each one directs a particular episode. It was for the USC class named Special Problems in Directing. Directors are chosen in an extremely competitive process and assign them a script written by 9 other writers from the previous semester.

‘Samir‘ is a modern adaptation of ‘The Count of Monte Christo‘, and was recently acquired by Warner Brothers for distribution!

Any plans for another feature film?

Tell us how you have evolved as a storyteller since ‘Diaries of the Unknown’ to ‘Geeta’ and ‘Difficult People’.

I was a blank slate while making ‘Diaries of the Unknown’. I was experimenting with and discovering new things every day.

With ‘Geeta‘, I learned so many things about writing a screenplay. We didn’t have much of a budget and it was a class exercise so we had to shoot it in 2 days.

My first draft had multiple locations and characters, but I realized that it wasn’t possible to pull it off in the budget and time I had. So I decided to stick to one location and make the story work better with that. I guess, the camera just being in one single location works better as it makes it more claustrophobic.

‘Difficult People‘ is a classical father-son story. But I wanted to use the medium of cinema to its fullest to create this audiovisual experience, so this film was much more meticulously designed and crafted than any of my other films. It’s all a learning process!

Any advice for budding filmmakers? How do you stay focused in the face of adversity?

I believe that it’s not enough to love cinema. If you want to be a filmmaker, you should devote your life to cinema. There are going to be rejections every day, and it’s hard. Know this before jumping into the world of filmmaking. All I will say is; keep that fire burning inside you. Things will happen one day!

Describe yourself in five words. Spotlight: How This Filmmaker Transitioned From Mockumentary To Documentary
Filmmaker Learns Life-Long Lesson From His Autistic Friend

Chindian Love Stories: against all odds, beyond skin colors
“I Have Never Felt More Present In My Life” — Nadira Ilana, Indigenous Filmmaker
Jason Lee: The Filmmaker Who Doesn’t Let Ego Get In His Way