Spotlight: Food Guilt, Plated Up As A Supernatural Procedural Series

Struggling with food guilt in dieting is self-sabotaging, as we commonly accept. But although this Viddsee Originals, Soul Food, was created to deal with that, to some extent, the experience was far from that.

We speak to the creators: writer Priscilla Goh and directors Kenny Tan, Ng Yang Meng and Dharfianto about the eight-episode series below.

Food guilt, but not for the conventional reasons

“I’m a chef. Even if I could déglacer, julienne, or make consommé, I can’t even think of a way to recreate the recipe.”

Those are the words of Adrian, a grieving son who returns to his father’s funeral in Something Lost, the first episode of the newly launched Viddsee Originals series Soul Food.

Conceptualised by Priscilla Goh, this supernatural procedural series explores the role food plays in human relationships. It stars Silver Ang as Verona, a psychologist-turned private chef who recreates final meals for those who want to meet their loved ones again.

Adrian’s story is Priscilla’s, as was the weight of regret and loss.

The offal truth about memory and identity

Priscilla conceptualised Soul Food as a cathartic way to deal with the closure of her family’s 40-year-old Kuay Chap hawker stall and eventual loss of the exact recipe. Her family ran a business selling Kuay Chap, a dish of braised meats and offals served with flat rice-sheets in a soy-based herbal broth.

Priscilla’s grandmother started out as a street hawker and moved to the Ghim Moh Market, which opened in 1978. The business was passed on to Priscilla’s second uncle, and now to her uncle’s wife.

Kuay Chap is an acquired taste, even for Priscilla, who only warmed up to all its “gristly glamour” while she was homesick studying overseas. It became a dish that represented nostalgia and homesickness.

As time passed, Kuay Chap wasn’t just a family business or an identity. Her uncle’s health deteriorated, and his wife still operates the stall but is unable to make the complicated dish by herself.

When Priscilla realised that the exact recipe was now lost, “it became apparent that Kuay Chap began to mean “regret” and “guilt” instead of just “homesickness.”

“I thought: “what would be a way to get the recipe? Am I really never going ever to eat it again? I had an overwhelming regret and sense of loss.” 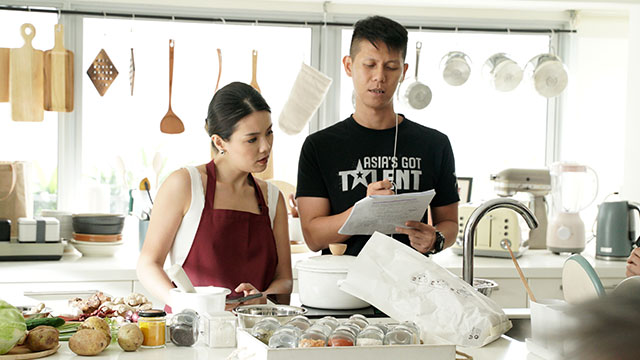 Using food as a medium of expression is not new to her. Before venturing into film, Priscilla used food in a short-lived Studio Art after graduating from a Bachelor of Arts degree in the US.

As a hobby, she also recreates food and dishes seen in anime, books and video games, and has researched, developed and documented more than 80 of them in her Tumblr @onionchoppingninjachef, including meals from Food Wars, Final Fantasy XV, Studio Ghibli animation, and Game of Thrones.

“Searching for catharsis, I put my words into the mouths of the characters. So Adrian’s lines in Episode 1 when he expresses his guilt at not being able to resurrect the dish his words come from a deep place in my heart.”

Drawing on her interest in food and food procedurals like Midnight Diner and the manga Wakako-zake, Priscilla led a three-person writing team for Soul Food to flesh out the Soul Chef’s search for closure over eight episodes.

“I’ve always thought of the food procedural as a very Asian concept, and have always wanted to do a procedural food show. That Verona, the psychologist turned private-chef, has taste/smell-colour synaesthesia, is a brainchild of her co-writer Christopher Fok.

“Verona’s search for closure, in part, mirrors mine. I also wanted the lead female to have a different motivation from stereotypical female leads – one that was general and basic enough for anyone of any gender to empathise with, but one that would be even more impactful because she was a woman.”

Co-writer Christopher Fok took up the research for Chicken Adobo. His Filipino mother Edelwisa Chavaria gave her stamp of approval for the recipe, and helped with the translation for the episode

Everyone in the team had to learn how to make the dishes from scratch. No one was aiming for perfection, but time was a constraint. With only sixteen days of shoot, art director Jocelyn Tay hosted a crash course in her home during pre-production for directors Kenny Tan, Ng Yang Meng and Dharfianto (Dharf). It’s a wrap! The cast and crew of Soul Food

Yang Meng and Dharfianto also played different roles in production, swapping from first Assistant Director and Director multiple times on the same shoot day. All three directors also had meetings with the writers to better understand different elements, such as Verona’s character motivations, world-building and the authenticity of each dish.

“Through these meetings, I understood more of the visual needs on-screen that I hadn’t really considered, and things like Verona’s tasting ritual and synaesthesia were added on.

“Though there were points of contention, due to the importance we placed on different things as writers and directors. I think some of them were slightly puzzled as to why was as hung up on the food as if I were shooting a documentary – but perhaps Soul Food is the amalgamation of all these conversations.

“I also enjoyed certain interpretations they put into the story, such as Verona’s house only having induction stovetops!”

There are no non-stick pans in life

As any experienced dieter knows, we can eat our feelings, but it’ll never be filling.

There are no neat endings in Soul Food series. Unlike in cooking, there are no non-stick pans in life, nor are there quick sprays or easy ways to wipe off spills.

Verona’s journey as Soul Chef started as a personal mission to find closure, as she, too, helps her clients find theirs. There’s a long trail of spills, and as the Malay proverb goes: nasi sudah menjadi bubur – (there’s no returning to rice when it has become porridge, ‘no use crying over spilt milk’).

The first episode is titled ‘Something Lost’, and the last (Ep8) ‘Something Found’. What would Priscilla have gained from this catharsis?

“In a way, though I haven’t fully come to terms with it, I guess through Verona’s story, I was trying to convince myself that there is hope that closure still can be found, even though things might not turn out like we want them to.”

What other food stirs up emotions?

We spoke to the three directors to find out what they consider as their ‘soul food’ and the most multi-sensory food experience they’ve had.

Ng Yang Meng (Episodes 6, 7 and 8): Yang Meng considers his mother’s ‘ABC’ pork rib soup as his soul food. When he’s in production, his parents prepare a soup or herbal drink for him when he returns. It’s left on the table with a small encouraging note.

“That’s the most distinct multi-sensory food experience for me. Even if the soup or drink has gone cold, it warms my heart and ends my day with a good note.”

“I’ve lived away from home since the age of 12, and I live on takeouts and takeaways ever since I started working. The meals made by my mother when she visits me, those are the ones that I would consider as being multi-sensory!”

Kenny Tan (Episodes 1 and 2): Kenny’s soul food is Teochew braised duck, which his late-grandmother prepared for him when he was growing up. The recipe was passed on to his father. It’s now a special birthday treat for Kenny.

“The first time I got to eat army rations during National Service was definitely memorable. It’s a strange mix of lukewarm pasta and duck rice in meal pouches, a fatigued body, numb tastebuds and under constant outdoor heat and the glare of intimidating army sergeants!”

Viddsee Original’s Supernatural Series On Food Memories And The Soul Sabrina Poon’s New Series Will Bring Back Memories Of Your First Love
In Her Humble Kitchen, Grandma Stirred Up Something More Than Food
This Filmmaker Just Shot Her Second Southeast Asian Food Documentary
Spotlight: Ng Yiqin’s Short Film Explores Masculinity and its Nuances