Spotlight: The Filmmakers of Love Shop On Capturing The Nuances of Love

As cliched sayings go: “All you need is love” and “love makes the world go round”. Well, the motivational posters at Love Shop go beyond these platitudes. They deliver the same optimism but with a tinge of realism.

Which is quite exemplary of the Viddsee Originals series ‘Love Shop’ in a nutshell. The 5-episode web-series follows Alex (Sherly Devonne Ng) who has her whole life turned upside down at the sudden death of her parents. The self-declared love cynic inherits their matchmaking agency, Love Shop: a business of commodifying love and orchestrating connections. All of which goes against everything Alex believes in. She avows to close the business but not before she inadvertently processes her grief and loneliness with the help of her colourful best friend Felicia (Shelia Tan), the practical fairy Godmother-like Aunt Wong (Adeline Yee) and her rolodex of clients.

Conceived by Sean Ng of AMOK, the story is brought to life by directors Melvin Chan and Mervyn Yap. “The idea started off when I walked past a mail-order bride agency and was fascinated that such a business still exists today. We developed the idea into a matchmaking agency to discuss the topic of love,” shares Sean Ng.

It was about “weaving a lot of things together to resemble the confusion, sadness, and stupidity of love… then making a joke out of it”, said screenwriter Mervyn Yap (who also directed the last 3 episodes). We speak to the filmmakers, including co-director Melvin Chan (who directed the first 2 episodes) about the fluidity of their collaboration and capturing the nuances of love. The fluidity of a trifecta collaboration

All 3 filmmakers had a history of working together, so it was a smooth process from the get-go.

“The main thing was to set the tone right and not get over-ambitious with what started as a simple idea. We wanted to make it down-to-earth and accessible,” said Sean. “It was pretty hands-off for me as Mervyn and Melvin took on development… but there were many viewpoints that arose from that,” he added.

“We agreed Mervyn would take the lead as he had a clearer vision of how he wanted to execute the story. I focused on being an inner voice, supporting him and giving him ideas to push the content further,” said Melvin. “We tried to delve deep into Sean’s psyche to understand what were the reasons the story came to be, and from there the theme and morals of the story was found.” A scene from episode 2 of Love Shop – ‘First Dates’

The nuances and truths about love

It was important to depict love in many forms – from the fairytale concepts to the cynical construct, and the mundane monotony in between.

People come in all shapes and sizes, so why shouldn’t their concept of love differ, too?

Sean: “That’s the thing – everybody’s idea of love differs, creating many differing viewpoints that we felt this premise was perfect to put across. We were sure we didn’t want to do a preachy narrative but instead create room for discussion.”

On balancing heavy scenes of loss and grief with goofy humour

Despite starting the series with Alex’s ugly cry, the series slowly develops into a goofy rendering of individuals looking to connect with each other. In episode 3 ‘Types‘, the interview clips of everyday people was refreshing and unsurprisingly not scripted as they described what they looked for in a partner. A scene from episode 3 of Love Shop – ‘Types’

Mervyn: “We had a guideline script that got tossed out the window… real life answers were funnier. It was me in a room with two cameras egging all these people on. I think pretending real life to be fiction is very funny. The rabbit was cute.”

Watching a drunk person is always funny to the observer

Capturing make-believe reality on film is a funny oxymoron – where the actor and filmmaker teeters on the fine line of reality and make-believe. In episode 4 ‘The One’, Alex hits rock bottom and goes on a drunk spiral. 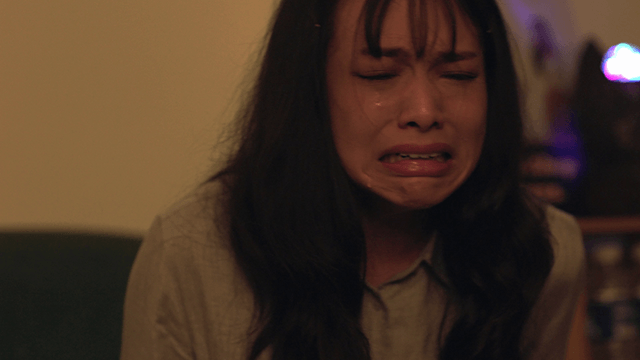 A scene from episode 4 of Love Shop, ‘The One’

Mervyn shares his glee in filming this scene: “There’s a tendency to dramatise when we drink to ease any form of grievance. But the drama really only stays in our heads. From the outside, it just looks kinda silly. The scene was like filming behind a bush while your friend becomes a sad drunk bumping into trees and shit. Sad but funny.”

We Want The Ideal Love, But Won’t Work For It. Why?
Spotlight: Saravanan Sam on Capturing Authenticity Through Music In Film
Spotlight: Ng Yiqin’s Short Film Explores Masculinity and its Nuances

After 50 Years Of Service, This Provision Shop Will Be History
Spotlight: Moving Forward Doesn’t Mean Forgetting The Past