Filmmaker Joel Lee: From Psychological Delusions To Reviving History In His Films 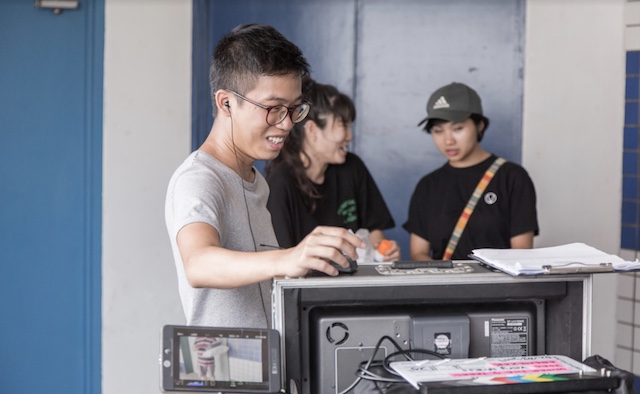 Filmmaker Joel Lee has always been fascinated by moving images. From an early age, he knew he wanted to pursue film.

He studied and graduated from the Nanyang Technological University’s School of Art, Design & Media.

As a student, he made some brilliant experimental films like ‘Lin’ and ‘Apart’. Both films are available on Viddsee.

Aside from that, he has also worked on numerous branded content, short films, and online commercials.

Most recently, he wrote and directed ‘Under The Five Trees’ and it just launched on Viddsee. He tells us how it all happened.

‘Under The Five Trees’ is inspired by a dating hotspot back in the 80s in Singapore, Gor Zhang Chiu Kar.

Lovers and friends would meet under the shade of five Angsana trees and create plenty of memories there.

As the story and history of the place are waning, Joel tries to revive its memory in his new short film.

“Gor Zhang Chiu Kar is a place that many older couples will remember. Yet everyone else does not seem to know it’s history or importance. They probably don’t even know of its existence,” says Joel.

“I found an Angsana seed on the ground one day, and I wondered why I hadn’t seen one in such a long time. A little research brought up a corner of Esplanade park where the five trees are.”

“It had such an unusual history. Important enough that they transplanted trees back at the exact same spot. Yet, few people seem to appreciate its history.”

“The place itself was unknown to me until a couple of years ago. I don’t have any memories of that place that are significant. But Johnny (the actor who plays the father) did mention that he visited the place with his wife many years ago,” says Joel.

Between the late 80s to early 90s, a fungal disease infected many Angsana trees in Singapore.

Many of these trees were cut down to prevent the spread of the disease – including the five iconic trees.

Five new disease-resistant Angsana trees were transplanted at the same spot in 2015.

Like the original five Angsana trees, the older generation in Singapore risk being overtaken by younger workers – unless they evolve.

“The first time I was there, the place was used as a holding area for the F1 race personnel and staff. There were containers and tentages set up everywhere. As if it has been kicked aside and forgotten,” says Joel.

There is a gap between the tech-savvy and the nots

“Being tech-savvy is slowly becoming the new normal,” says Joel.

“I don’t think it’s possible to find anything that hasn’t been touched by technology’s encroachment. Personally, I don’t feel that gap can be bridged entirely,” claims Joel.

“That’s not to say that we can’t learn to adapt. But it’s hard to change when we have been living without a smartphone for so many years. Now it’s a part of our everyday lives.”

According to Joel, the most important thing that the older generation needs from us, the general public, is understanding.

We live in such a fast-paced society and it’s easy to forget that there are people out there without the same exposure to technology as us.

On marrying photography and digital art in the film

In the film, we see a father struggling to use cameras and smartphones.

By trying relentlessly, he manages to take some photos with a digital camera that his daughter gave him.

His daughter, impressed with the outcome, added touches of digital art and presented the results in an art exhibition.

“Photography speaks to many people. It is something that has changed so much over time – like our phones.”

“Digital art is something younger people can relate to. So bringing them together was a nice way to show both characters coming together at the end.”

There was a total of 14 art pieces designed for the short film. Production designer Zhong Wei and illustrator Hui Min produced the artwork.

‘Lin’ revolves around a husband suffering from schizophrenia and unable to get over the death of his wife.

‘Apart’ follows the story of a sister who is way too attached to her brother that she falls apart without him.

‘Under The Five Trees’ is a huge departure from that. It features a heartwarming relationship between father and daughter. Location is also a main concept of the film.

“Those two films were student films and I’d like to think they were made when I was still experimenting. I had a lot of fun making them. There is always space for all sorts of genres haha!”

“If there’s one thing I’ve learned from making this film, it’s that there are still a lot of stories in Singapore that have yet to be discovered.”

When asked what’s next for him, Joel said he’s looking forward to going on holiday and get some rest. Which is well-deserved!

Watch ‘Under The Five Trees’ by Joel Lee (Singapore) here.

Article by Gowri Krishnan in News on October 8, 2019