Why is Singapore home to you? What makes you proud about being Singaporean?

In the fourth season of ciNE65, a short film competition organised by Nexus, aspiring filmmakers are invited to explore the Singapore identity with a three-minute film on the theme “Home • Truly”.

Filmmakers Sanif Olek and Wee Li Lin interpreted the “Home • Truly” theme through two commission films produced for the competition. Both films were inspired by their childhood memories, and coincidentally set in old-school salons!

Sanif’s film, ‘The Usual’, is set in an indian barbershop, and explores the idea of service to the country, while Li Lin’s film, ‘The Perm’, is a comedic drama about a young girl’s experiences on her new perm, and her close-knit community.

This competition is open to all Singaporeans and PRs with two categories — Student Category and Open Category. There are eight awards in these two categories, with cash prizes ranging from $1000 to $3000. The winners of Best Cinematography will go home with an additional Panasonic Full HD Camcorder, while the Overall Best Film Award winners will get a 4K Panasonic professional camcorder and a learning trip to Busan International Film Festival! 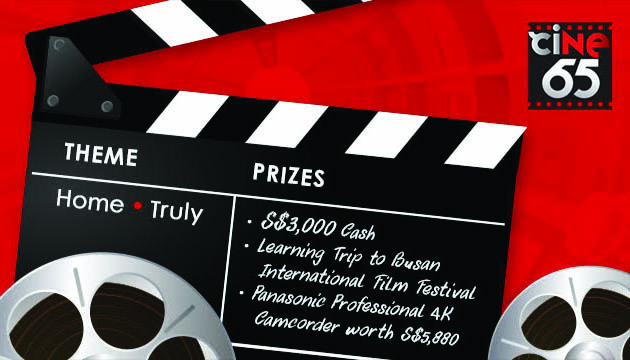 There are also cash prizes to be won from public voting for the Audience Choice Award, and an Inter-School Challenge Trophy for the school with the highest number of quality submissions.

The submission period ends on 17 April 2017, 12pm. Click here for more details on the competition.

Submit Your Story Of “Singapura” To The ciNE65 2019 Movie Makers Awards
Viddsee Juree Singapore Is Back! Submit Your Short Film Now!