Telling Stories She Believes In, Not The Stories That The Market Wants

Norris Wong is a director, lyricist, scriptwriter and essayist based in Hong Kong. Her two short films on Viddsee are the LGBT drama ‘From Here To There’ and the relationship drama ‘Fall’.

We speak to this filmmaker as part of our highlight in March on female filmmakers in conjunction with International Women’s Day.

Here are some takeaways from our chat about her work, her approach to telling stories about romantic love with a responsibility, and what she thinks a “real” movie should be.

Norris is born and bred in Hong Kong, finding inspiration in the power of storytelling from her childhood and early formative years.

“When I was a child, my mother used to read to my brother and me. She translated English fiction to us, line by line. The most wonderful story she told us was ‘One Thousand & One Nights’.

“I was intrigued by the structure, and the suspense element of this particular story and was fascinated by the power of storytelling.”

#2 – HER MISSION & RESPONSIBILITY IN STORYTELLING

Norris also grew up in an all-girls school and a healthy diet of cheesy romantic fiction. She also shares that from the ages six to 19, she had little interaction with the opposite sex.

She began exploring alternative narratives to her experience of life from her formative years, through her work in film.

Her MFA graduation film from the Hong Kong Baptist University, ‘From Here To There’, a road movie about two grown men who revisit their relationship from their days as high school lovers.

Watch ‘From Here To There’ by Norris Wong (Hong Kong) on Viddsee:

“I love road movies like ‘Little Miss Sunshine’ and ‘Getting Home’. There aren’t many road movies in Hong Kong, as it’s a small city to travel from end to end. As it was my graduation short film, I thought a road movie would be fine.

“Growing up in an environment without the opposite sex was a very interesting experience. I was interested to tell a story about two teenagers who were close friends, their friendship, and their homosexual romantic relationship.”

After she experienced her first romantic relationship, Norris realised that love and its portrayal in fiction was misleading. The fantasy was disappointing.

“Since then I began to explore how I could give a new or updated angle about romantic relationships in popular culture.”

There’s more on ‘Fall’ in this article: Why are we brainwashed by love?

#3 – TELLING A STORY THAT SHE BELIEVES IN, NOT WHAT THE MARKET WANTS

Norris shares that her biggest struggle as a creative professional is the decline of the Hong Kong industry within Asia. Hong Kong, with a population of 7 million, is a small domestic market.

“What makes things worse is that local filmmakers tend to make films for the mainland Chinese, which could be censored. And the mass audience has a culture that I struggle with. Whenever I have to create something from the market, and if I am forced to give up what a real movie is, that’s my struggle.”

Pressed to elaborate further, she shares: A real movie, to her, is an expression or presentation of a story based on what he or she has observed in life.

“When a filmmaker tells a story he or she doesn’t believe in, or shape a story by predicting the expectations of the audience of box office (results), that’s not a real movie.” 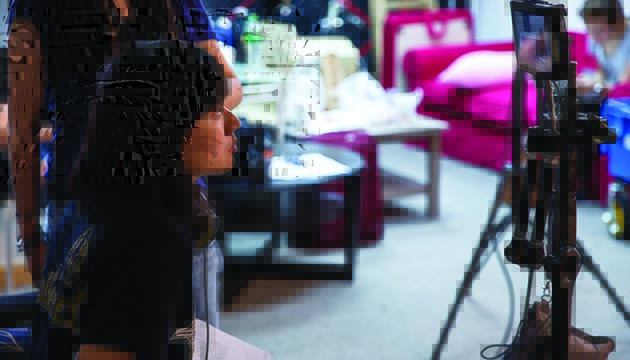 Talking about sex is taboo, and people in Hong Kong are surprisingly very conservative, Norris shares. People think women especially shouldn’t talk about sex, and it’s “evil for them to do so.”

“I read in our local news: A couple, who were married for a few years, visited a doctor for advice because they couldn’t conceive. They were both university graduates. The doctor realised that they didn’t know that sexual intercourse was necessary to get a child.

“You might find it funny, but to a certain extent it reflects how little sex education we have in Hong Kong. After that, I found an interview about a local female host of an adult TV programme. She said she was divorced as her husband didn’t accept her career. This inspired me to write a story about female host.”

Norris’ next film is still in pre-production, and she’s seeking for funding locally.

We loved the TV drama series she wrote, ‘Margaret and David: Green Bean’, a Cantonese drama which airs on some regional pay TV services in the region. And we’re definitely looking forward to more from Norris!

Why Are We Brainwashed By “Love”?