Wee Li Lin is one of the pioneer female filmmakers in Singapore. Boasting Brown University and NYU-Tisch Asia as her alma mater, she’s best known for her feature films ‘Gone Shopping’, ‘Autograph Book’, ‘Norman In The Air’ and short films such as ‘Centrepoint Kidz and ‘The Perm’, amongst many others.

Her films have travelled to prestigious festivals such as the Tribeca Film Festival in New York, Short Shorts in Tokyo, the Cairo International Film Festival and many more. Her latest work, ‘Interwoven’, was created in collaboration with the Passion Made Possible campaign. The short film follows Noor, a textile shop owner, who didn’t let age stop her from embarking on a creative journey and ends up coming into her own. 1. What is the inspiration behind your short film ‘Interwoven’?

I wanted to tell a story of an ordinary person who felt boxed into a category she couldn’t escape from. In this case, the person is a mom or ‘auntie’ – Noor. But Noor wants to be more than just that. She wants to be recognised as a creative person and to be seen as a whole (which I think many people resonate with). Although Noor has a loving family and pleasant work environment, it isn’t until she meets the Culture Shapers of Singapore that she is inspired and confident enough to embrace that wholeness.

2. Could you tell us why you were interested in working with Siti K and Ivan Heng?

For anyone who follows the Singapore theatre scene, they would definitely recognise these two names. They are both so tremendously talented. Having the chance to work with them (even only for a few days) and being able to showcase them was really an honour for me. At that time, I had also just recently seen Siti in ‘An Actress Prepares’ which was a monologue play that I thoroughly enjoyed – that made me want to work with her. As for Ivan, seeing how he’s grown W!ld Rice from strength to strength and being such an advocator for the Singaporean art scene, I consider him a force of nature and agent to Singapore’s evolution for the better. He’s such a charming and wise person, I just fell in love with him within the first 10 seconds of meeting him! 3. What were the creative challenges you faced in the process of creation?

It was a challenge to seamlessly fit the ‘real’ culture shapers into this fictionalised world. The best inspiration I got was from ‘Sesame Street’ and ‘Electric Company’. These skits never felt forced to me even though they were incorporating real celebrities from all across the arts field to be part of their fictional worlds. 4. How did you create opportunities within the larger narrative for other filmmakers to collaborate and contribute?

This was a special situation where the other directors had to wait for my story to come out and subsequently develop theirs (loosely) based on my story. The idea was mooted by the executive producers (STB and Viddsee) and the other directors stepped up to it patiently and excellently. They made the films their own and yet found ways to incorporate the linking feature (the fabric) into all their stories so seamlessly. My job was to just guide them on a nominal level as these directors are all accomplished and have their own style. 5. As a culture shaper yourself, what do you feel are the expectations people have from you (or you from yourself) especially when working in a project like this where so much collaboration is needed with other culture shapers and prolific names?

Yes, I definitely felt some pressure. Not from others, but pressure from myself on how I was going to make this fictional-meets-real-life-culture-shapers narrative work and relate to the audience without making them feel uncomfortable. Thankfully, I had the help of Melissa Sidek who completely enriched the character of Noor. She’s done such a great job conveying Noor as a relatable character.

6. The girl who plays Nadia (Aisyah Aziz) is such a natural. How did you come to cast her?

I’ve had the pleasure of working with Aisyah before. She was an absolute delight to work with and has a real screen presence. She had mentioned that she was keen to do more acting. So when this opportunity arose for the pivotal role of ‘Nadia’, I thought she would be great for it. Aisyah is just a natural and she instinctively masters one of the biggest hurdles in acting, she doesn’t ‘act’. She just trusts in herself and is. 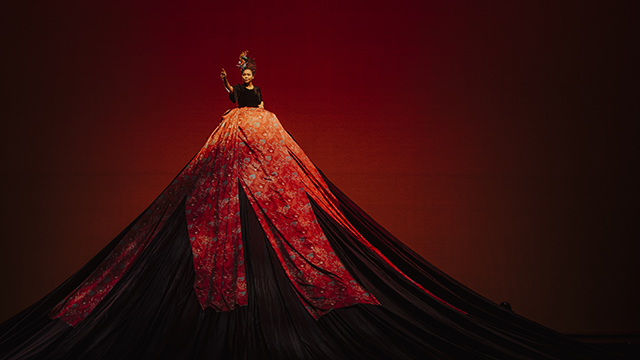 7. Who designed the fabric that Noor made in the film? Was there a significant meaning to it?

Our Art Director, Jeddiah Neo, introduced me to her close friend Charmaine Tiong of Coldknees Design. We wanted to create something Batik-inspired. The motifs in Charmaine’s design reflect Noor’s love of Singapore, including elements of the Gardens by the Bay, orchids, and also her cat, Baby, who is her muse. Charmaine did a beautiful job in coming up with the design, it was very pretty and quirkily distinctive to who Noor is.

8. Can you tell us more about your upcoming projects?

I am currently working on a corporate project, then making a personal short film in June.

9. What encouragement do you have for other storytellers who are passionate about making their work possible?

Have courage and resist the urge to self-censor.