In Her Own Words: Kat Goh on ‘Merging Lanes’

Known for donning many hats as a producer and director for both TV and movies, Kat Goh is one of Singapore’s notable women filmmakers. A regular on the film festival circuit, she is also an award-winning director, winning Best Short Film and Best Director at the 2009 Singapore International Film Festival for her first short film ‘Swimming Lesson’.

With that, Kat’s illustrious career has garnered her blockbuster feature films and her very own production company, Boku Films. She shares her thoughts on ‘Merging Lanes’, her new short film about two strangers who not only cross paths on a regular basis, but also share a lot of similarities despite coming from vastly different backgrounds. In a previous interview, you mentioned a love for shooting films about relationships. What did you want to bring out in ‘Merging Lanes’?

In ‘Merging Lanes’, I wanted to explore the relationship between two strangers who crossed paths regularly but never spoke to each other. One is the driver and the other is the passenger. They see each other countless times, and will probably notice if one of them is in a bad mood or if the other is sporting a new hairstyle. They have similar daily routines and habits, and we know if given the chance, they could be good friends. What if one day, one of them decides to start a conversation?

I’m sure this is a common experience. From the neighbour you see in your lift every morning on your way to work, to the fellow jogger running the same daily route. We see them all the time but don’t talk to each other because of the brief duration of time you’re in each other’s company, and by the time you decide to start a conversation, the lift door opens, or you had already run past the jogger. Perhaps, it’s time to say the first hello. A scene from ‘Merging Lanes’

Madam Ang and Analyn Campos, the characters in the film, are both female and service workers. Was that a coincidence?

The fact that the two protagonists are female is deliberate because I feel more for female characters as a female director. I also like to break the norm and feature female characters working in a male-dominated work environment like Madam Ang who is a bus captain.

What were the challenges (shooting and post-edit) in shooting a film heavily reliant on the transition scenes between the two characters’ universes?

The main difficulty was shooting the scenes for the montage, which showed their similarities between the two protagonists in their daily routine. Although each shot takes up roughly 10 seconds of screen time, each setup took a few hours. With the many locations involved, we had to find the right locations within minutes from each other so that we could do a company move in the shortest amount of time. Filmmaker Kat Goh, on the left, directing Shiela Matias (who plays Analyn) and Chua En Jye (who plays Madam Ang) on the one scene where they first say hello to each other

As a director in a diverse nation like Singapore, tell us about your thoughts or responsibilities you felt when invited to take on this project?

My line of work means I’m more exposed to working with people from different countries and diverse cultures and societies. Teamwork is really important in filmmaking, so my mentality has always been one of open-mindedness and optimism.

However, I have many friends who work the usual 9 to 5 office jobs and I’ve heard them talk about their displeasure at seeing more foreigners in their workspaces, or at crowded eating spaces and public spaces. It’s a topic that’ll always invite comments – sometimes heated – even from the quiet ones in the group.

I’m always surprised by their anger, and it got me thinking about why.

I feel that one of the main causes is that both sides have not had the opportunity to get to know each other better. If the first point of contact is at work where it is stressful, or in a queue where everyone is rushing to get somewhere, so everyone’s defences are always up. Together with difference in culture and habits, it will likely result in misunderstandings if something happens and no one bothers to think from the point of view of the other person. Especially if there already is a level of bias involved. I hope to gently nudge the audience to think about this point. 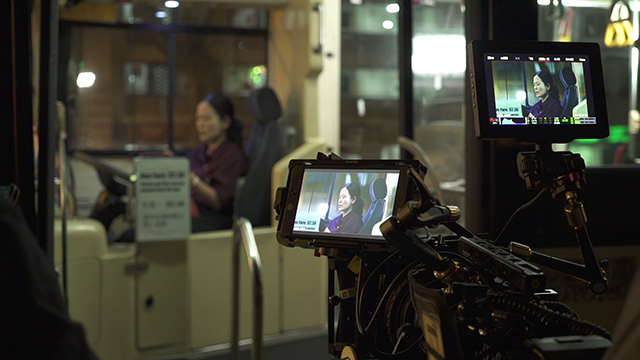 Behind the bus scenes for ‘Merging Lanes’

I hope to convey that every stranger you have the chance to meet might not be that much different from you. Even if they are of a different race, language or religion or from a different country or culture – a simple smile can melt a wall of ice. You might be surprised by how much you’d get along with your newfound friend.

As a filmmaker, you’ve worn many different hats (producer, director) across different platforms (TV, movies, film festivals). Could you share highlights of the moments that have shaped you as a creator?

As a child, I’ve always had vivid dreams every night of myself in different scenarios and genres. The next day, I’ll tell my friends about them, so much so that it became daily entertainment for them. So, I guess I’ve always liked to tell stories.

I started my career as an assistant producer in TCS shooting a TV series. It was a really good training ground for someone who studied engineering and knew nothing about drama or film shoots. In the beginning, I was interested in getting my hands on a good script and transforming the words into visuals for the world to see and experience. However, I was given the opportunity to direct my first short film funded by The National Arts Council. The short film ‘Swimming Lesson’ managed to win a few accolades in some film festivals and that piqued my interest in directing.

Now that I’m so far down the road, my main interest will always be directing but because a healthy film budget is hard to come by these days, I can only be patient and bide my time while I continue to produce for my production company.

This year I’m working as a producer for some of Kelvin Tong’s projects. In 2020, I’ll be working on a new feature project of my own. It’s a heart-warming film made up of a few stories surrounding the ghost month.

‘Merging Lanes’ is part of Project RED, an anthology of short films by acclaimed local filmmakers which explores how all of us, regardless of background and where we come from, have more in common than we think. Project RED is produced by Viddsee, in collaboration with Gov.sg.