In His Own Words: M Raihan Halim on ‘Common Ground’

The self-confessed ‘part-time scriptwriter, full-time storyteller’ is best known for his passion for pushing the boundaries when it comes to storytelling. M. Raihan Halim started his career winning awards for scriptwriting and garnering experience in television. This road eventually led him to embark on his feature film project, ‘Banting’ in 2014 of which he was the writer, producer and director. We speak to him about his new short film, ‘Common Ground’, a story about an altercation between Singaporeans at a hawker centre. He talks to us about Singapore, developing the characters to tell the story, and filming at a busy location like a food court. As a director, how did you prepare your actors for such an emotionally intense encounter?

Frankly, I had the easiest job on set because my casting directors (Syahirah K. and Ima Jumaon) did a great job casting the best actors for the roles. We met once for a chat, joked around a bit and were off to the races! If there was one moment where I had to prepare an actor, it’d be Benji.

Maxi (Lim, who plays Robert) can be intense when he is on-screen and I felt that Benji was intimidated by it. So it was all about making Benji comfortable with Maxi but it didn’t take very long before the two could slip in and out of their roles in an instant. I’m a lucky guy having the two as my leads for ‘Common Ground’. 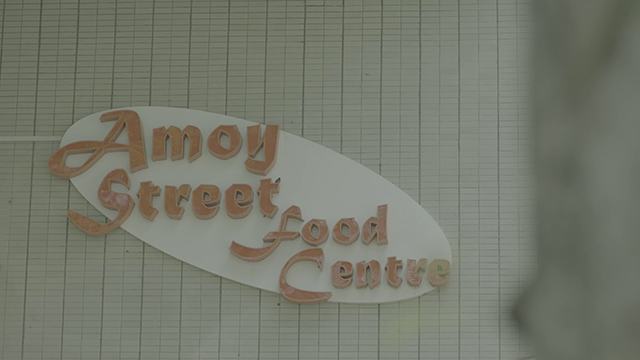 What were the challenges in shooting in a public place like a food court?

Do remind me to NEVER shoot in such a busy location again! We knew that it’d be tough but at the same time we wanted a realistic setting where the two characters could meet and have their altercation. I just love the look of Amoy Street Food Centre and I really wanted to film there.

Besides the noise levels and process of getting clearance to shoot in a public area, I thought it went smoother than usual. I had a blast filming there, and the food was awesome and reasonably cheap. So I can’t complain, really. In between takes and behind the scene with (from left to right) Benjamin Obaje, Maxi Lim and Yamin Yusof (who played Ade, Robert and Salihin respectively)

Tell us how you fleshed out the character of Ade, Danial, and Salihin and the roles they played as bystanders, witnesses and mediators.

‘Common Ground’ was originally a three-person performance piece. But we found out that whittling the story down to two people would make it better. So, it became a story about Ade and Robert.

The point of ‘Common Ground’ is not to show the ugly side of Singaporeans but how sometimes we can get lost in our own ego. Malays have this saying: “Tak boleh kena sikit” which roughly translates to being extremely sensitive. Robert’s character is like that.

Ade for me is an interesting character because I wholly wrote it for Benji. Between him serving NS and being a medic in the Army and how he talks, I was intrigued to see how Benji (or Ade for that matter) would be like in a food court setting when confronted by someone like Robert.

The roles of Daniel and Salihin were created to show how calmer minds can trump over hotter heads. They don’t see any malice in Ade’s suggestion and felt that, yes, perhaps they could do one small thing to be considerate.

What do they represent about our society’s attitudes?

I think all the characters play different sides of society’s attitudes towards the situation. I’ve been in situations like that and it’s true where if you allow your ego to take over, things just go bad. All it takes is a clear mind and calm heart to assess a situation and it’ll be okay.

What does ‘Common Ground’, the short film mean to you?

‘Common Ground’ for me is about Singaporeans. How we can find common ground if we could all take a step back and talk about it. A scene from ‘Common Ground’

My sincere hope is that audiences will stop judging people based on their skin colour, nationality or language. See things with a clear mind and an open heart, put your ego aside.

Once upon a time, my late grandpa was an immigrant from Ceylon (which is Sri Lanka today). Seeing how foreigners or new citizens are treated makes me wonder about the hardships he faced when he first landed in Singapore all those years ago.

Right now, I’m finishing up my second film Ibu. It’s been a marathon and we’re excited to finally complete the movie! We’re also working on two television projects that are scaring all of us. It’s challenging, exciting and one heck of a monster project. Pun intended!

‘Common Ground’ is part of Project RED, an anthology of short films by acclaimed local filmmakers which explores how all of us, regardless of backgrounds and where we come from, have more in common than we think. Project RED is produced by Viddsee, in collaboration with Gov.sg.